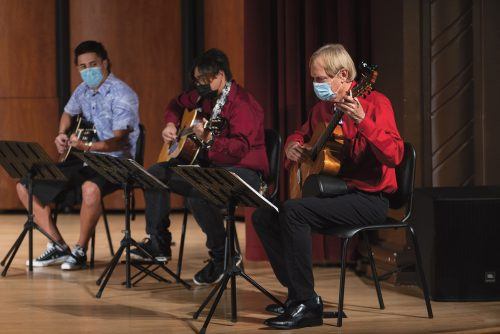 The University of La Verne guitar ensemble, seven musicians in all, gathered in Morgan Auditorium to present an eclectic variety of music they worked on this semester.

Before an audience of about 40, the musicians gathered on stage saw many reactions from the audience –  from clapping to ‘whooping’ with enthusiasm for their performance.

The group played some covers of music with of classical Spanish and Irish roots, with some more modern takes on popular contemporary music.

The ensemble members and both instructors opened the concert with a sweet melodic slow Irish tune with the syncing of all nine guitars on stage.

The soft picking of each individual member resonated throughout the auditorium.

They played “Drunken Sailor,” an Irish ballad with an unknown origin.

This song, with its more intense strumming pattern and some recognizable picking patterns, was familiar as it is used in such popular shows as “SpongeBob Squarepants.”

Mark Estrellado, sophomore music major, who performed in the ensemble said that singing through the mask was the hardest part of the entire performance.

He said that he had practiced singing with a mask on, but he still found it hard.

Another well-known song,“The Sound of Silence,” by Simon and Garfunkel was in the program. The guitar playing was dynamic with more forceful strums and louder picking throughout the chorus of the song while lighter humming picking filled the background.

Some students sang along in their solo performances, including Danielle Hernandez who performed one of Taylor Swift’s songs.

“They are all learning, so you get to see the inner workings of their hard work,” said Stan Whitley, Rancho Cucamonga resident and father of Stanley Whitley, one of the performers.

Whitley said he enjoyed the variety of musical styles.

“There was a lot of Christmas stuff but I think we got a nice range … and they really got to demonstrate the guitar ensemble’s ability,” Espinoza said.

“I think it would be cool if we could have a little bit more people,” said Hernandez, ensemble member and senior music major.