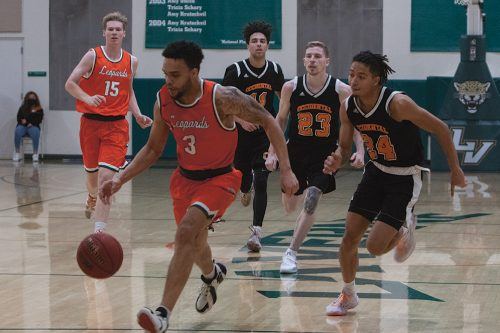 La Verne senior guard Isaiah Knox (3) drives the ball down the court with junior forward Austin Rapp (15) and a trio of Occidental defenders trailing behind in Saturday’s matchup at Frantz Athletic Court. The Leopards struggled against the Tigers and lost, 55-50. The men’s basketball team now stands at 0-2 in Southern California Intercollegiate Athletic Conference play. / photo by Litsy Tellez

The Leopards were not quick enough in their 55-50 loss against the Occidental Tigers at the Frantz Athletic Court Saturday afternoon.

The men’s basketball team is now 0-2 in Southern California Intercollegiate Athletic Conference play and it was an evenly matched up game as the Tigers stand at 1-1 in SCIAC play.

“We need to attack first and not wait to get into a rhythm,” senior guard Denzel Stephens said. “We just need to do the little things in the beginning of the game rather than making those adjustments later.”

The Tigers were on the board first with a 3-point shot made on their first drive of the game after the Leopards put the ball out of bounds. The Leopards committed a hefty 23 turnovers in the game, and so far have 90 turnovers this season.

When the Leopards regained possession, junior forward Seth Shaw passed to senior guard John Malone II at the top of the 3-point line. Malone missed the 3-point attempt but junior guard Paul Antonis was there for the rebound. Antonis found junior guard Brad Yasukochi who then drove the ball around the key until he slipped and turned over the ball back to the Tigers.

Minutes later the Leopards were down 6-0. Shaw drew a foul and was given two free throw attempts to close in on the early deficit. He missed the first one but the second one was successful, which put the score at 6-1.

The Leopards’ free throw percentage was 52%, which was up 5% from their previous game, an 81-58 loss to Claremont-Mudd-Scripps. Junior guard Alex Blanco said the free throw drills they practiced helped to actually apply it in the game.

“We did a lot of situations where we played live on free throws,” Blanco said. “Where someone would shoot a free throw and then we would play live action after that.”

Two minutes passed and the Leopards’ offensive woke up. They tied up the game 8-8 and forced the Tigers into a time out.

The score stood tight as back and forth play continued. With less than 10 minutes left in the half, the Tigers got a jump on the Leopards and took a 9-point lead.

The Leopards pushed hard to come back but the Tigers were always a few steps ahead, going into halftime with a 33-24 lead.

For the first eight minutes of the second half, the Leopards carried the same energy from earlier and stayed behind by eight points. Stephens gathered the ball after the Tigers were unable to put one up and headed down the court. Malone went for the unsuccessful layup but Shaw was on the other side of the net for the rebound. The Leopards then closed in on the gap.

Three back-to-back scoring plays for the Leopards and a well guarded defensive side kept the Tigers’ score stagnant. For the first time all game, the Leopards took the lead, 39-38.

“We’ve been practicing and really working hard so I think our game is going to turn into something really beautiful to watch,” freshman guard Casey Knudson said.

Their lead was short lived after the Tigers put up six consecutive points. Antonis got the ball rolling again for the Leopards as he drained a 3-point shot to trim the deficit to two.

With four minutes remaining in the game the Leopards were down by nine. Two minutes passed and the Leopards held the Tigers from three scoring opportunities. Antonis, with a defender on him, found senior guard Isaiah Knox at the top of the circle for a 3-point shot, helping close the gap.

In the final minutes, both teams scored four points bringing the score to 55-50.

“We fought back as best as we could, it just wasn’t enough,” Antonis said. “Every week we are getting better and better and I can see it in our progression so I am expecting some wins here very shortly.”

The Leopards started a stretch of non-conference games this week by hosting West Coast Baptist on Thursday night. They will take on George Fox at 7 p.m. Friday at Frantz Athletic Court. After matchups with Knox, Loras and Cal Baptist, the Leopards will return to SCIAC play against Cal Lutheran at 7 p.m. Jan. 5 at home.