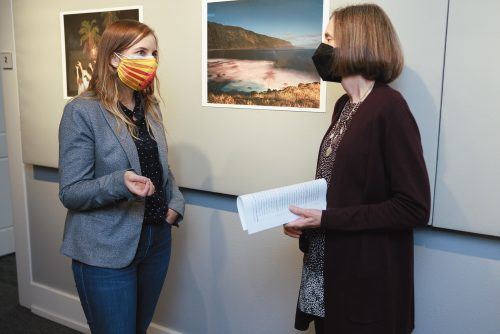 Associate Professor of Photography Shannon Benine discusses her expanded documentary work with University Chaplain Zandra Wagoner during the closing reception and artist walk-through of Benine’s exhibition “If you can read the ocean, you will never be lost” Dec. 1 in the Irene Carlson Gallery of Photography in Miller Hall. The exhibit runs through Dec. 17. / photo by Jingyao Liang

The photography department held a walk-through at the Irene Carlson Gallery, to show guests the current photo exhibit “If you can read the ocean you will never be lost” by Associate Professor of Photography Shannon Benine.

About 30 community members attended the event last week, which led them through the display of photographs of landscapes, portraits and scenery telling the story of Hansen’s disease, commonly known as Leprosy, and the misconceptions of those who have it.

“Molokai wasn’t truly a prison until the U.S.-occupied Hawaii converted it into one,” Benine said. “So that’s when they exiled the family members, and they were forced to move out. The colony on the island … was only for those with leprosy.”

“‘If you can read the ocean you will never be lost’ is a quote from a Polynesian navigator. They did not use the stars to navigate, they used the ocean and the tides to be able to tell where they were,” Benine said.

Benine added that this aspect of the name negated the aspect of the white savior complex and the idea that the natives of Hawaii were primitive intellectually.

One picture in particular showed an older woman with white hair and a white complexion in a white dress, and a smug expression on her face. She held a martini in one hand and was fully strapped with a shimmery bright red accordion. Her hand rested on her hip as if demonstrating defiance with a beautiful scenic background of Hawaii’s ocean, orange sky and palm trees.

There were many pictures of hands interacting with nature and culture itself. While one photo showed a smooth, youthful hand petting a horse, others showed older hands etched with tattoos, wrinkles and looked calloused as well, from all those hands had endured in that lifetime.

Caves were a common element in many pictures in the gallery too. Lighting was an important aspect of the display of these pictures because they seemed to be glimmers of hope in the dark-filled caves. Only silhouettes of plants and rocks were visible in the dark, however the light brought about an interesting contrast with its dimmed yellow and blue rays that illuminated the dirt and the plants that had bloomed in those spots.

Benine said that there were many landscape pictures because that was her initial passion and she was not allowed to take pictures of the residents of the hospital established for those with Hansen’s disease. Many of the portraits of people are those from the mainland otherwise known as the topside and the north shore where the leprosy settlement was, is known as the backside.

Keoki’s I’O, which means Hawaiian hawk, shows a tattooed hand holding a carved shell held lightly by a middle finger and thumb. Light brown and ivory in color, the carving contrasts with the intricate swirls, bold lines and drawings running down the arm of the person holding it.

Benine said that there were many connections in Hawaiian culture to spirits and animals, and she decided to connect that Hawaiian mythology to the humanity that captivated the island in her pictures.

“I think because she’s focusing on a small colony, a small village, it really shows that they’re just only people and they’re not these weird beings,” Immani Vanderburg, junior criminology major, said.

The gallery seems to demonstrate the human aspect of what it means to be a person and part of a community that becomes a family.

“For me it kind of represents the differences of what we forced the island to be and what it actually is… it shows the pride of life in the area and even the beauty in the simple things,” Catherine Urasche, junior international business and foreign language major, said.

Urasche said it was also interesting to see that in one of the pictures, depicting a person clutching a cross, and thought it was very colonial and demonstrated the colonization that they had gone through.

“I guess everyone’s connected to the environment and (this) makes us aware of that even more,” Gerard Lavatori, associate dean of the College of Arts and Sciences and professor of French, said. “They are just beautiful photographs.”

Benine said there is still a lot to learn about the island because new stories from these people who were banished because of leprosy are finally being translated to English and bringing new changes to the history of the island as we know it. She said that she just hopes to tell their story through the pictures and that the project will not be finished until she feels she has done that.

“If you can read the ocean you will never be lost” will be on display at the Irene Carlson Gallery in Miller Hall through Dec. 17. Gallery hours are Mondays to Fridays from 10 a.m. to 5 p.m.