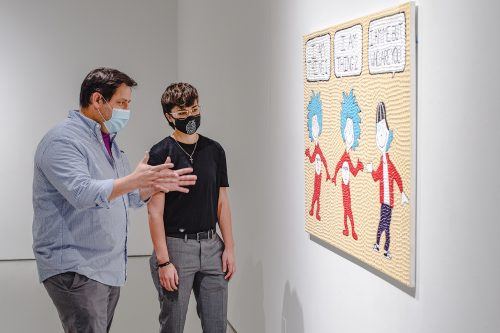 Family, friends and faculty were on hand Tuesday for the opening of the “Reflections,” the senior art exhibition, where art majors got to showcase their best work via their senior projects.

“A lot of this work, it’s about identity, about self-discovery, self-realization,” said Keith Lord, professor of art.

Each student’s work is unique and holds meaning beyond what meets the eye.

“Nearly all of (the students exhibiting) settled down to the underlying reason they make art – to connect people and to have people understand they’re not alone,” said Lord.

Berry’s art statement is that it is OK to be your unique self.

Berry’s piece depicts the cartoon characters Thing One and Thing Two from Dr. Seuss’s “The Cat in the Hat.” Berry is depicted in Thing Three, dressed differently from the others. Thing Three is shown saying “I am me, but who are you?”

The art program at La Verne not only explores color theory, materials, and techniques but also touches on personal growth and philosophy.

Lindsley’s piece is precisely placed in the middle of the gallery. It is a clear house with poems etched onto the sides.

“The subject of this is about the absence I felt throughout my life, feeling disconnected from these communities that I can identify with,” Lindsley said.

The poems on the house are letters to herself in moments when she feels disconnected.

“It’s a house to represent me because I’m housing these feelings and growing with them,” she said. “I wanted to still be transparent to show that even though it’s there in my life and I try to hide it, so it’s kind of blending into the space.”

Stefanoff, studio art and art history double major, said she originally applied to ULV to be a criminology major.

“Before registration started I said, ‘You know what? I’m going to go with my passion. I’m going to choose art,’” Stefanoff said.

Some of the art faculty expressed that they are proud of the students’ work and know they have the tools to continue flourishing.

“If you have a happy life doing what you’re passionate about, then you’re successful and you’re probably gonna make it in whatever way you can because if you understand creative thinking, there’s more than one path a person can take,” said Lord.

“We approached studio arts academically, but also we believe in individual expression,” Walpa D’Mark, adjunct professor of art, said. “I love seeing the final group show because I’ve seen each student here from the beginning until now, just seeing the growth in their own independent voice.”

Jon Leaver, professor of art history, has also been a part of the students’ journeys.

“A lot of these students I’ve known for a long time so seeing this as the culmination of the last few years is emotional,” Leaver said. “The works are all very personal.”

The exhibit runs through Jan. 28.