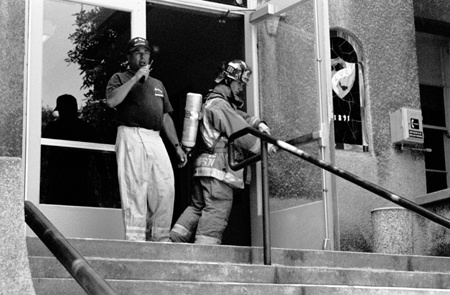 Last Thursday, the La Verne Fire Department received a call reporting a suspicious smell coming from Founders Hall. Sharla Geist, administrative assistant for the natural sciences department, noticed the smell and wondered if it was gas. She followed protocol and immediately called Robert Beebe, assistant director of facilities and management, to report the smell. Unknown to Geist, someone else had called the La Verne Fire Department, which responded by sending four fire trucks.
“A student working on a biology research project was working with some kind of bacteria next to the vents, and the fumes ended up running through them,” Geist said. The students were evacuated from Founders Hall by the fire fighters and within a few minutes were allowed back in after fire fighters found no reason to suspect any danger. / photo by Jessica Valerio