By Jessica Valerio, Monique Jimenez on March 19, 2004 in LV Life 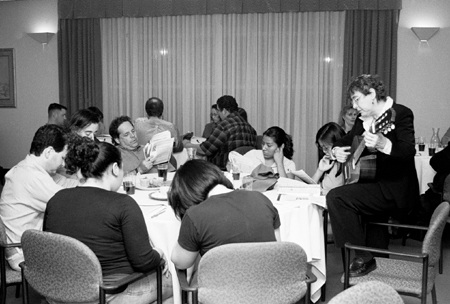 In the Jewish tradition of Passover, Rabbi Leslie Bergson plays a traditional song at the University of La Verne’s Model Seder on March 10 in the President’s Dining Room. Bergson, Jewish chaplain and Hillel director at the Claremont Colleges, led the seder, retelling the story of the Jewish Exodus from Egypt, in honor of Peace Week. / photo by Jessica Valerio

The model Jewish Seder attracted about 40 people last Wednesday in the President’s Dining Room, who participated in the ritual Passover dinner.

The Seder meal filled not only the body, but also the spirit with its food, music, story-telling and questions and answers – part of the tradition of the eight-day Passover holiday, which starts next month.

Rabbi Leslie Bergson, Jewish chaplain and Hillel director at the Claremont Colleges, presided over the event.

She encouraged everyone to get involved by singing and reading as well as joining in the eating of symbolic foods of the traditional meal.

“The Passover Seder commemorates the exodus of the Israelites from slavery in Egypt,” Bergson said. “On a larger scale, it celebrates the concept of liberation for all people in all times.”

At the beginning of the evening, Bergson lit candles on the table, a part of the ceremony dealing with parts of the creation story, in which darkness covered the faces of those in slavery.

As part of the story, participants paused for seven breaths, and then said, “God breathed, ‘Be Light!’ And light came into being.”

The tables for the model Seder were topped with symbolic foods, including parsley, horseradish, lamb shank and a chopped apple mixture, which filled the Seder plate.

There were also sliced eggs, matzoah and grape juice in place of wine.

During the ceremony, participants must drink four glasses of wine.

All participants ate unleavened bread (matzoah), recited ancient Jewish prayers and learned about one of the world’s oldest religious traditions.

“This model Seder sets up the season of liberation and freedom for Jewish people and the nation,” Bergson said.

In these unstable times, the themes of freedom and liberation have particular resonance.

Playing the guitar, Bergson encouraged everyone at the event to read and sing along with phrases from “The Rainbow Haggadah,” a modern version of the traditional prayer book that tells the story of Passover.

“The Rainbow Haggadah” tells the ancient Passover story using current reference to war, racism, discrimination and peace, effectually keeping the issues alive. The purpose of this reading is to stray away from all these negativities and move to a more united, peaceful front.

And in the process, Seder participants get sense of the experience of the Jews in Egypt.

As part of the celebration of liberation, Rabbi Bergson explained that participants should relax, recline and enjoy the food.

“We must lean to the left, in a relaxed position while eating, just like the Romans feasted while they ate,” she said.

Jews, who were slaves, usually ate standing up and in a hurry, she explained.

The model Seder gave people, Jews and non-Jews alike, a better understanding of Judaism and the meaning of this holiday.

ULV sophomore Beatriz Mendoza said she joined the celebration out of curiosity.

“I wanted to learn about traditions in other religions,” she said. “I think, especially with a very diverse campus like here at ULV, it is very important to be open minded.”

Passover begins this year at sunset on April 5 and end on Easter Monday, April 12.

The model Seder was presented as part of last week’s Peace Week activities.