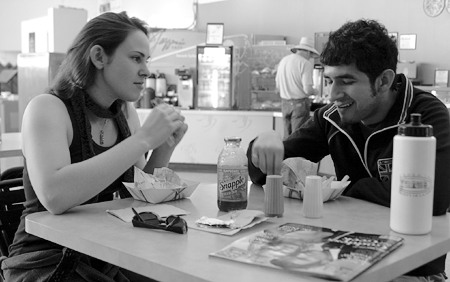 Senior Stephanie Barraco and junior Anthony Guerrero, both theater students and commuters at the University of La Verne, take a snack at the Spot. “I eat fast food every day,” said Barraco, who finds herself eating the greasy stuff everywhere she goes. / photo by Jessica Valerio

It is a late Wednesday night. Your night class just ended at 10 p.m. and your stomach is still growling, just like it was throughout Professor so-and-so’s lecture. You have a choice set before you.

You can either run home and fix yourself a tasty little sandwich or you can take the easy way out and get in line behind a few other hungry night-owls at Jack-in-the-Box’s 24-hour drive-through.

The choice is easy. You get in line.

The convenience of having a warm meal in your hands in just minutes has made many people, college students and stay-at-home moms alike, fans of the fast food corporations.

Although the convenience factor may be enough to win some over, the alarming health risks associated with fast food consumption have made many people look elsewhere for their nourishment.

Second to smoking, obesity is the leading cause of preventable death in the United States, killing 30,000 people a year.

“It’s just so bad for you,” said Kay Gaumond, a Bloomington resident who is raising three of her great-grandchildren. “It is overpriced, not good for you, and I’m leery of the ingredients. I don’t eat hamburgers from fast food places just because I don’t think that’s meat in there. We never eat fast food.”

Being grossly overweight causes the heart to move faster, putting excess strain on the muscles and eventually making it more difficult to move.

These health complications can result in premature death.

In the summer of 2002, a suit was filed against McDonald’s – the world’s largest fast food chain – by a man who held the fast food chain responsible for his obesity and health complications. The suit was dismissed, but the threat of such lawsuits has led fast food corporations to lobby for federal legislation to prevent future legal hassles.

McDonald’s has introduced a new menu offering salads and low carbohydrate alternatives to such classics as the Big Mac. The familiar “super-size” option will no longer be available on the McDonald’s menu, much to the dismay of some McDonald’s frequenters.

“I am mad that they are taking it away,” said Jennifer Martinez of Upland. “It made sharing so easy.”

Porshia Adams, manager of a Montclair McDonald’s, is glad that the option will no longer be given.

“Super-size is too big for people anyway,” Adams said. “McDonald’s is trying to get healthy, this is just one step.”

While taking away the super-size option may help reduce the rise of obesity, this is not a final solution.

But the fast food corporations are only doing their job by supplying the hungry public with their fast food needs, the final decision is up to the consumer.

“You can eat fast food, but you still need to exercise,” Martinez said. “It isn’t that difficult.”