By Lauren Pollard, Lesley Michaels on May 2, 2008 in News 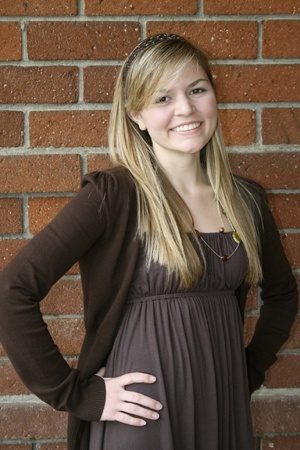 Chanel Kaufman, a junior economics and Spanish major, is the newly elected president of ASULV. Voting took place during the week of April 7. / photo by Lauren Pollard

Change is such a prevalent topic these days that sometimes students are more concerned with the prospect of change than with celebrating advances.

ASULV a small group at the University is a representative student government that embraces change through advocating for the interest of students.

The organization provides an official channel for the expression of students views.

“ASULV fights for the educational and financial needs and desires of the students,” ASULV Presi­dent Jona­than Fitzhugh said.

Fitzhugh, a senior economics and business major, said that ASULV is an advocate of leadership roles for students, presenting them with positions such as senator at large or vice president of communication.

Whatever the position, the main goal of ASULV is to help the students with their lives and future careers.

Receiving funding from student fees in tuition, ASULV is capable of conducting and assisting major projects at the University.

“Student fees go to ULV, then get divided into leadership programs and the Campus Activities Board,” said Donna Ibale, an ASULV senator at large.

Past projects of ASULV have included increasing class options for students with difficulties in scheduling, getting greater financial aid packets and creating a second school mascot.

The projects for next year will be discussed on Friday.

Ideas to improve the school and student life include new outdoor tables for Davenport as well as the whole campus and installing an LCD electronic marquee in the new campus center to alert students of campus functions.

“Students complain that the amount of flyers on campus is overwhelming, so if we get a marquee, hopefully we can help students easily see what’s going on,” Kaufman said.

Furthermore, ASULV establishes a committee to be the voice of the students at important meetings.

“We have students sit in at parking and academic meetings. We may not be able to solve the issue, but we can still be an influence,” Kaufman said.

Each of the 17 student members of ASULV are carefully selected.

The upcoming year may expand the amount students on ASULV, since this year the club generated great interest, Fitzhugh said.

Presidents are elected every year in the spring, and may continue in office if re-elected. Fitzhugh served only one year, since he became familiar with ASULV late in his school career.

“Fitzhugh is extremely passionate about students’ needs,” Ibale said. “He’s very dedicated and has a large vision for ASULV as well as ULV.”

“Being the ASULV president was one of the most stressful yet awarding experiences,” Fitzhugh said.

“If you generate pride and respect for yourself, you should consider yourself a good applicant for ASULV,” Fitzhugh said.

Kaufman, the upcoming president for the 2008-2009 school year, will expand upon previous projects and continue to lead the way for student enhancement.

“Chanel is a dedicated and experienced woman, and we’re expecting great things from her as president,” Ibale said.

Members of ASULV agree that it is a rewarding experience for themselves as well as for the future of ULV.

“It’s great to be part of something that responds and provides for students,” Ibale said.

“It’s great to be part of an organization but also a part of change that makes a difference to your classmates, as well as those in future years,” Fitzhugh said.

Lesley Michaels can be reached at lmichaels@ulv.edu.