By Lauren Pollard, Lesley Michaels on April 25, 2008 in News 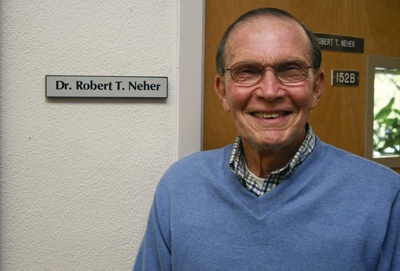 Robert Neher has been teaching at the University of La Verne for 50 years and currently serves as the chairman of the natural sciences division and professor of biology. His areas of expertise include environmental quality, plant systematics, biofeedback and stress reduction, nutritional biology and cytogenesis. He has also served as a La Verne city councilman. / photo by Lauren Pollard

Robert Neher’s posts over the years in La Verne have been many.

His primary role and accomplishment, however, has been teaching in the University La Verne biology department for 50 years.

A Midwestern originally born in Illinois, he was a son born to a biology teacher, Neher, 78, credits his father with having the greatest impact on his life’s choices.

“I learned work ethics and the important principle of tolerance,” Neher said. “You do not always agree with people’s ideas, but you should still be happy to work with people who … have ideas.”

While studying for his doctorate at Indiana University, Neher met the president of ULV, then called La Verne College, and promptly received an invitation to teach at the school.

“I simply said, ‘Yes, that’s what I want to do!’ and I came to La Verne and finished my doctorate,” Neher said.

Nobody can recount the evolution of ULV better than Neher because he has been teaching since 1958.

“The school has changed a great amount since I came here, but it has not changed in its sense of values,” Neher said.

Neher witnessed the school’s transformation from a religious environment with mandatory daily Brethren chapel services – to the more religiously diverse and secular university it is today.

When Neher began teaching at ULV, there were only three faculty members of the biology department, compared to the current seven.

Furthermore, Neher witnessed a school without the ruling of environmental protection agencies as we have today.

“There were no rules, there were not nearly as many environmental concerns as there are today,” Neher said. “If you wanted to do something, you had to do it yourself,”

It is evident that Neher was a person who took charge and molded many aspects of the University, particularly in his department. Initiating a pre-med program, Neher embraced versatility.

“I wanted to broaden the curriculum. You learn a lot when you have to teach many subjects,” Neher said.

“Bob has nurtured the department. He has brought aboard high-quality people who share his commitment of responsibility and ethics,” said Jeffery Burkhart, current chairman of the biology department.

This refers to the sharing of resources in the biology department, as well as other various departments in the school.

In addition to providing education in the classroom, Neher also introduced field studies to the biology curriculum.

A program was initially started to take students to Hawaii to learn about shrimp.

In the past decade, Neher has offered students the opportunity to travel in the summer to his property in Montana.

A handful of students travel to the 160 acres of land to volunteer to work on the property or conduct research for their biology senior projects.

“He has had valuable contacts (with) previous students that have developed into financial support for the University,” Harvey Good, professor of biology, said.

Biology students will continue to reap the benefits of being exposed to pristine land in Montana, as the biology department plans to continue this learning experience.

Good, who had the pleasure of being a student in one of Neher’s first classes at La Verne accounts for some reasons Neher has achieved such an elevated status and great respect at the University.

“He is extremely down to earth and a highly intelligent man. He is a great role model for students,” Good said. “He presents the content of his courses in a friendly way and is open to discussion.”

Neher garners the same respect from his students that he does from the faculty at ULV, thanks to his teaching style and open door policy.

Having over the years taken on such roles as interim University provost, dean of students for two years and chairman of the biology department,

Neher proves to be an excellent leader.

“He has worked as the provost two times, which lets you know the level of respect people have for him,” Burkhart said.

His off-campus involvements, likewise, have been many.

He has been church moderator, city planning commissioner, vice president of the La Verne Land Conservancy and a part of the San Gabriel Valley Mosquito Vector Control District – part of the reason we don’t have a mosquito problem in California, Neher said.

It is through such avid participation that Neher has learned his greatest lesson.

“If you do not care who gets credit for something, you can do just about anything,” Neher said.

Since he has worked alongside numerous people in varying committees, Neher reminds everyone that the power of making suggestions is underestimated. This is particularly visible through his own perseverance, and the changes he has made at ULV over the years.

Neher carries his versatility in his professional achievements into his relationship with students.

Calling him an intelligent adviser and caring human being, office coordinator Sharla Geist recalls many times when Neher would lose track of time because his office was flooded with students.

“He is more than just the chairman of natural sciences. He is also a counselor, father figure and source of all types of knowledge,” Geist said.

“He also offered counseling and support for students who were facing academic and personal problems long before the school provided a counseling staff,” Good said.

He said he is in great health, and plans to continue teaching at ULV until he feels his time is done.

“He is absolutely irreplaceable. He has had such vision for the University. He is an accomplished field biologist and human being,” Burkhart said.

Neher plans to stay active in his club memberships, even after retiring from teaching.

“As long as you are healthy and enjoy what you are doing, you should keep doing it,” Neher said.

Lesley Michaels can be reached at lmichaels@ulv.edu.