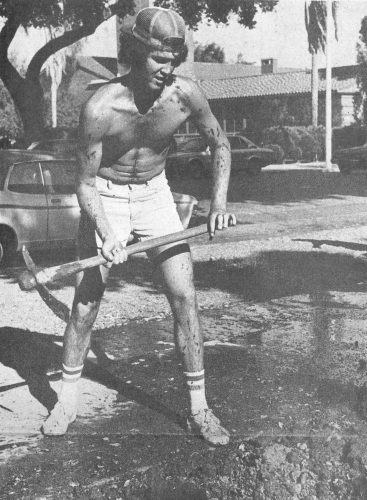 SHOWING THE SPIRIT – Senior Ron Hart works with diligence and dedication during the recent Build La Verne Day event. BLVD is a time when students put away their books, the faculty laid down its chalk, and the administration set aside its paper work to work together in harmony and unity to beautify the University. After consulting with architect Franklin Howell, 25 projects were outlined and presented to various interested groups. Winning the Loving Cup was the American Armenian International College (AAIC) for its work on the Supertents. / photo by Kathy Frey

Students from the American Armenian International College (AAIC) were recipients of the Loving Cup which was awarded to the group with the best attendance. The 40 participants from AAIC were responsible for scrap­ing off and painting the entire trim, doors and rails around the Supertents, including the theater.

Eta Omega Delta (HOD), the newest fraternity on cam­pus, won an award for putting in a new sprinkler system, leveling the ground between Miller and Founders Hall and designing the rock landscaping.

The Delta Phi Pi sorority, with a full compliment of 30 students, painted room 211 in Founders Hall, and for its fine work, the sorority was honored with a plaque. Also, winning an award was the Lambda Chi Fraternity, which painted the lines in the Science building parking lot. Lambda Chi will continue on the project until all four lots are completed.

Under the direction of Allan Fink, assistant to the President, preparations for BLVD began in September. Cappozzoli, praised highly by Fink as a “fantastic leader,” sent out letters to all the college organizations to assess the interest level and the number of people available for BLVD.

The initial response was positive, and the expertise of architect Franklin Howell was solicited. Howell prepared the master plan which was divided into 25 pro­jects.

Two weeks before BLVD, the projects were outlined and presented to various interested groups. The groups then chose their projects. Individuals who reported and did not belong to an organization were assigned to a group.

Judges were selected, and guidelines set in order to establish criteria for the winner of the Loving Cup.

Judges Leonard Harper, coordinator of student ac­tivities and chairman for BLVD; with Dr. Sharon Wright, dean of student services; Allen Collier, freshman; Rolinda de Moes, freshman; and Christopher Keating, sophomore, toured as a group to get an overview of the projects. On different occasions, the judges inspected the projects individually.

Standards set by the judges were enthusiasm, quality and amount of work done in proportion to the total amount of members participating.

Dr. Dwight Hanawalt, chairman of  health and physical education, kicked off the event by leading the all-campus sweep which began at 8:30 a.m. By 9 a.m., the entire work crew was in full swing.

Hard work was intermingled with fun, and the groups performed many and varied tasks, and the feelings of many of the participants were expressed by Harper.

“BLVD, like no other event, characterizes the spirit and the unity within the entire campus,” Harper said.

“I’m grateful to all for their devotion and dedicated assistance for the college,” said Dr. Armen Sarafian, president of ULV. “It was a most productive day.”

The budget for BLVD was $5,000, according to Dr. Alton Morse, vice president of business services. All the bills have not yet been processed, but he did not feel the full amount  had been spent.

The objective of BLVD had values far beyond saving money, said Fink. It is the comradeship, unity and spirit that exists all year and was expressed in one day. That has a lot to say about how the students, faculty, staff, alumni and friends feel about the University.