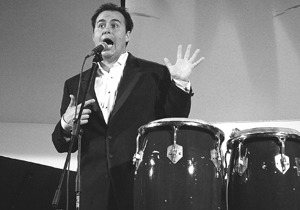 With an array of melodies pouring out from behind him, Chris Williams, jazz vocalist, took the stage in Founders Auditorium Friday.

The band went on at 8 p.m. and played an hour-long set infused with energetic tunes and movement.

Williams incorporated the use of scatting in many of his songs and managed to put a personal touch to the song “Dream a Little Dream of Me” by using his voice to play the part of trumpet.

The song, made famous by “The Mamas and The Papas” in 1968, also featured New York bassist Dave Miller, who has also played with the renowned Royal Crown Revue.

Both young and old attended the concert and joined in appreciation for the music by snapping along to the beat.

Students from Claremont McKenna College said that the music blended together seamlessly and loved the vocals of Williams.

The audience also had a special guest present that night: Pastor Grady Williams, Chris Williams’ father and inspiration to his career.

“I grew up singing in my father’s church and I always loved music, so that’s kind of how I got started in my singing career,” Chris Williams said.

Even as a member of the audience, Grady Williams could not help but to yell out words of encouragement and clap along to his son’s performance to signify his support.

Though the singer does not play with the same band in each performance, he keeps close ties with one particular member of the group – guitarist Blake White.

During the show, Chris Williams expressed his gratitude toward White by telling the story of how they met.

The vocalist met White at a gig they had for a 90-year-old woman’s birthday, which Chris Williams joked was his target demographic.

Immediately in awe of White’s talent, the vocalist claimed that from then on he never wanted to do another gig without him.

Midway through the performance, Chris Williams and the band played a song entitled “Do You Know What It Means to Miss New Orleans,” in honor of the Hurricane Katrina victims.

Gratz was especially fond of the song, and both he and the singer thought it would be nice to express the “joyful reminiscence” of the Big Easy.

Chris Williams also played the original Willie Wonka classic “Pure Imagination,” that was the favorite song of the evening both to him and many members of the audience.

“Overall it was really interesting to see how the band came together to form great music while still playing in their own worlds,” said Richard Armas, a 19-year-old Pasadena City College student from Glendora.

The vocalist enjoyed the ability to interchange his group members and play with new people at different gigs.

“It’s a little challenging and a lot of fun to see if it’s going to work out or not on stage,” Chris Williams said. “I get to play the part of director, and in tonight’s case I think we did really well.”

Many of the songs performed at the concert are also featured on Chris Williams’ new CD, “Premodernism,” which can be picked up in Virgin Megastores and online.

Megan Montalvo can be reached mmontalvo2@ulv.edu.