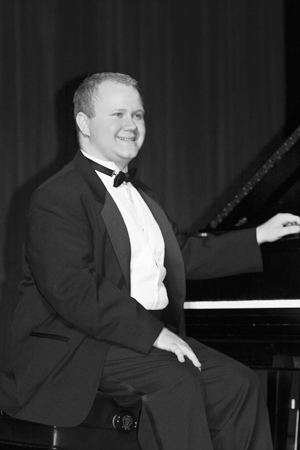 Cody Smith performed his senior piano recital April 8. Smith has been playing the piano for 16 years and said this was the largest audience he has played for at the University of La Verne. Smith has also performed chamber music with various instrumentalists and vocalists, accompanied choirs, played the keyboard in a few musicals and was the assistant director of the Men’s Ensemble in 2004-2005 under former ULV Music Department Chairman Scott Farthing. / photo by Lindsey Gooding

“I loved the programming. His Bach was great and the Bartok is one of my favorite pieces,” said Steve Gothold, associate professor of music at the University of La Verne.

“To watch it was entrancing,” said Dustin Smith, Cody Smith’s 18-year-old brother. “The pieces he chose had a special meaning to me because it brought back fond memories of when he used to practice them back home.”

Cody Smith began taking piano lessons early in his life, with encouragement from his mother.

“I always wanted to play the piano so I tried to live out my dreams through him,” said Jan Smith, the pianist’s mother.

Although he was still very young when he developed his interest, the pianist’s talent was noticeable.

“Cody used to play at our house all the time, and we’ve been listening to him since kindergarten,” said Bill and Lois Masterson, the senior’s friends and former neighbors from Long Beach.

“He did great tonight, and we would not expect any less of him,” the Mastersons said.

Many of the pieces that were chosen were in a minor key. An encore performance finished the evening.

“I really liked the little bit he sneaked in at the end,” said Juanita Arnwine, the pianist’s aunt. “It was delightful to see all the variety of people that came out tonight to support Cody.”

Cody Smith will be graduating this May and plans to pursue a master’s degree in the near future.

While studying at the Orange County High School of the Arts (OCHSA), Cody met former ULV artist in residence Timothy Durkovic, a professor who would have a great impact upon his gift.

“He has been more than just a mentor to me. He has been a great friend and has taught me so much,” Cody Smith said.

Some of the senior music major’s past accomplishments include performing at the Orange County Performing Arts Center in Peter Schickele’s “Monochrome VI,” a piece designed for 10 pianos, being named the “Most Improved Pianist of the Year” in 2001 while at OCHSA and being the assistant director of the Men’s Ensemble in 2004-2005 under Scott Farthing, former chorale director at ULV.

At the age of eight, when Cody’s mother devised his life’s dream board, Cody told his mother, “I think I would just like to play in front of a big audience and make them happy with my music.”

Indeed Cody has accomplished this goal many times over and will undoubtedly continue to bring joy to audience members of all types throughout his lifetime.

Megan Montalvo can be reached at mmontalvo2@ulv.edu.