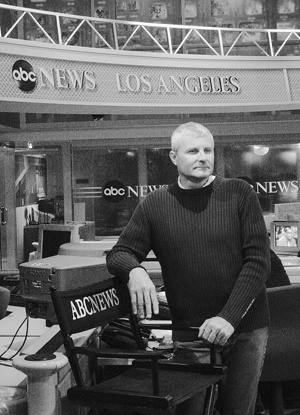 Rod Jackson is an assistant regional manager for NewsOne in Hollywood and part-time instructor in the communications department at the University. Jackson works with affiliate network news teams to supply videos of breaking news stories to ABC networks around the country. / photo by Rhiannon Mim

The NewsOne Bureau walls in the Prospect Studios in Los Angeles are lined with pictures of ABC News’ greats, like Barbara Walters, Hugh Downs, John Stossel and Diane Sawyer. Between the walls covered in these well-known faces is the less familiar, yet equally important Rod Jackson piecing together the behind-the-scenes news events for ABC News and its affiliates.

As assistant regional manager for NewsOne Los Angeles, Jackson, 50, has, for the past four years, managed to balance his day job with the rigors of being a part-time professor of journalism at the University of La Verne.

It was eight years ago in August when Jackson first signed on with NewsOne, and he now oversees three main functions: the movement of video, filming of correspondent live shots and packages, and supplying video to other affiliates.

Jackson describes his teaching position at ULV as being “a fluke.” A student at ULV, who was interning for NewsOne, first suggested the idea to Jackson. George Keeler, chairman of the communications department at ULV, was informed of Jackson’s potential interest and decided to follow up.

“I got a call from George Keeler asking me if I would be interested in teaching and that’s how it started,” Jackson said. “It was something different and fun. I get a chance to pass along things I know to the upcoming generation of journalism.”

This fall Jackson experienced a chance to change his regular teaching regimen at ULV by a new class teaching for media ethics.

“Everyone says journalists have no ethics,” Jackson said. “I thought it would be interesting to teach a class in it.”

Aside from his media ethics class, Jackson has also taught news reporting, radio and television news writing and editing, and feature writing classes at the University.

From the time he was in high school, Jackson has always had a desire to teach. History was his subject of choice.

He grew up in the small town of Everett, Wash., and developed an inquisitive nature as a young boy, which he nurtured by reading many books, especially science-fiction novels. As he grew older, Jackson immersed himself in various hobbies such as swimming, scuba diving, skiing, skydiving and playing the trumpet and piano.

When Jackson entered Washington State University, he began with a major in microbiology, but after one semester, he became interested in communications and decided to make the change. It was there he received a bachelor of arts in communications with an emphasis in broadcast journalism and a minor in political science.

While attending journalism classes at Washington State – the alma mater of media great Edward R. Murrow – Jackson met a professor who would have an outstanding impact on his life.

Jim Dunne was Jackson’s first journalism professor whom he considered to be a mentor, though Jackson never told Dunne.

“He was a very good writer and a very strict teacher,” Jackson said. “He taught me two journalistic principles: less (words) is more, and on time is late and late is inexcusable.”

Through his own personal experience, Jackson has seen how this bit of advice has proved tried and true.

“It is always better to arrive early for an interview because you never know what you’ll ?catch the person doing if they don’t expect you. It makes for a better story,” Jackson said.

After graduating from Washington State in 1978, Jackson embarked on his professional career as a radio news director in Moscow, Idaho. He later got his first television job as a sports anchor for KAPP in Yakima, Wash.

The greater part of Jackson’s career was spent in Salt Lake City, Utah, where he worked as a reporter for 13 years. There Jackson reported on several environmental stories, his favorite being “Undersea Voyagers,” a story of children at microbiology camp.

“Environmental reporting is most fun because you get to do different things,” Jackson said. “In ‘Undersea Voyagers,’ it was rewarding to see the direct impact it had on kids.”

Stories like these have earned Jackson one Emmy and eight Emmy nominations, several Murrow awards, and his most prized Environmental Writing Fellow Award given by the Radio and Television News Director Foundation for his excellence in environmental writing.

When not at work, Jackson spends his free time enjoying the company of his wife and two daughters, Alexandra and Stephanie. His eldest daughter was recently married to a marine who is currently serving in Operation Iraqi Freedom. Along with happy congratulations for Alexandra’s marriage came worry for his new son-in-law’s position in the war.

“When she married a marine, the whole war in Iraq was driven home,” Jackson said. “You hear in the news about soldiers dying, and you just sit there, waiting in dread until the names are released.”

Jackson has personally spent time in the Middle East during the war also.

In the beginning stages, he was sent there to arrange coverage for news affiliates and experienced the rigors of being away from home, receiving a very minimal amount of sleep, and adapting to his cultural surroundings.

Although carrying quite a heavy schedule, Jackson still seems to make time to give back to the community.

He makes donations to the Salvation Army and various public radio stations to demonstrate his support.

And when it comes to his students, Jackson always makes himself available.

“He’s a good teacher,” said Vanessa Avilez of Claremont and one of Jackson’s former media ethics students. “He has a lot of experience, and he always seems to make time to talk to students about whatever they need.”

His ability to balance work, school, family and fun is what truly makes Jackson a Jack of All Trades.

“He’s a great person to get along with,” said Cherise Stokka, NewsOne producer from Rancho Cucamonga.

But, as Stokka politely agreed, “I think detail-oriented is a nicer way to describe him.”

“He’s a news consummate and a good guy to work with,” said Mark Petrovich, assistant producer for NewsOne from Glendale.

Jackson is indeed consumed with news, from listening to it on his car, to watching it on several television screens at work. News is everywhere he is.

“I’m not obsessed with news,” Jackson said. “I try to avoid it when I’m on vacation, but it’s just part of my job.”

Jackson gets a phone call from an ABC affiliate, “We’ve got footage of a small plane fire in Sacramento that happened 20 minutes ago.” A picture of the plane instantaneously appears on Jackson’s computer screen, “I see it now… we’ll put it on air tonight.”