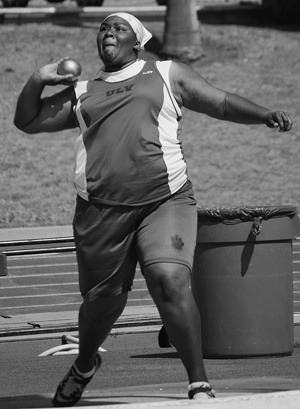 The men’s and women’s track teams continue to raise the bar of competition.

On Saturday both teams participated in the Ben Brown Invitational at Mt. San Antonio College in Walnut, where many of the athletes qualified for the NCAA championships.

In the men’s events, Darnell Gilbert a senior sprinter, is making his presence known.

The veteran track member, who has ran since he was a freshman, is no longer surprised by his results.

On Saturday Gilbert placed first in the 100 meters in a record time of 11:05.

“I am trying to win the lead in both individual and team events,” said Gilbert. “I am feeling good about the season and I want to continue to work on my techniques and transitions.”

In the 4×100 Gilbert, along with John Bolton, Dwayne Griffiths and Lonal McKnight, placed fifth overall with a NCAA provisional qualifying time of 41.69.

“We still need a lot of work,” said Bolton, a senior who runs the first leg. “We had really bad hand-offs and we need to improve in order to better our time.”

“The four men who finished second in the 4×400 did extremely well,” head coach Pat Widolff said. “It was the fifth fastest 4×400 in La Verne’s history.”

Griffiths, a senior who runs both the 4×100 and the 4×400, believes both relay teams still have the potential to place higher.

Some other notable performances from the men’s side were junior McKnight running a season best of 21.95 in the 200 meters; senior Efrain Partida ran a season’s best of 4:01.44 in the 1,500 meters; and sophomore Jesse Carrington who ran 16.05 in the 110 hurdles.

From the women’s side, seniors Veronica Andrews and Chelsea Sherier led the team with outstanding performances in their events.

Andrews finished with second place in the javelin with a mark of 129-10. She already qualified for NCAA a week earlier with a provisional mark of 131-0.

Sherier, the current record holder of the Southern California Intercollegiate Athletic Conference for the best in the pole vault at 12-2 also qualified for NCAA with a provisional qualifier of 11-8.

Katrina McCoy also set a personal best in the pole vault with at mark of 11-1.

Widolff was pleased with senior Alexis Candelaria winning her heat in a record time of 17:46.81 in the 5,000 meters.

“I tell all my players to simply do their best,” Widolff said. “We have a really small team this season, number-wise but I really like their attitudes. There have been great early season marks and I am also very pleased with individual performances.”

Next up for both teams is the SCIAC Top Four Meet at Redlands tomorrow.

Keisha Clay can be reached at kclay@ulv.edu.