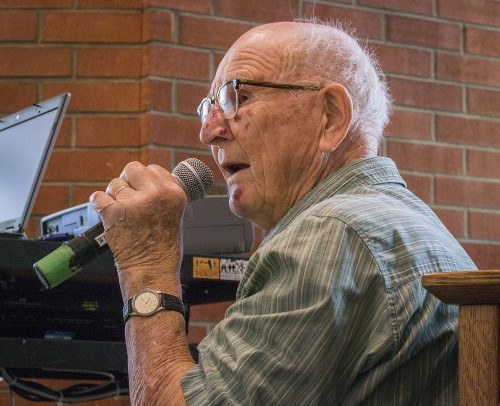 The University of La Verne honored 42 alumni and faculty pacifist and conscientious objectors for their public service during World Wars I and II with a plaque dedication last week in the Chapel.

Among those present for the ceremony were faculty, students, President Devorah Lieberman and many family members of the men to whom the plaque is dedicated.

An alumni civilian public service panel kicked off the event as four of the 42 honorees shared their stories of service during the wars.

“I’m inspired by this statement and by the people listed on this plaque,” University Chaplain Zandra Wagoner said.

Men who were serving as pacifists or conscientious objectors, such as those on the panel and on the plaque, objected to serving in the armed forces for reasons of conscience or believed that war and violence were unjustifiable.

These beliefs were widely held by members of various peace churches of the time; though many of the men honored who attended La Verne College were members of the Church of the Brethren.

“It’s a matter of conscience,” said Clair Hanawalt, one of the men serving on the discussion panel.

“Your final judge is what you decide is right for you.”

They also participated in a variety of Civil Service occupations deemed of national importance.

In place of serving in the armed forces, men performed jobs including firefighting, forestry, soil conservation and more.

Civic Public Service men worked without wages; responsibility for supporting them and maintaining CPS camps fell on the men’s congregations and families.

Many men serving as conscience objectors or pacifists faced ridicule from family, friends and colleagues. Many of these men spoke about being deemed cowards for their beliefs.

No such position as that of CPS existed in World War I, so those who declared themselves conscientious objectors were imprisoned.

The only name on the presented plaque for service in World War I was Jesse Brandt, who was imprisoned for his view on war.

Jesse Brandt, who Brandt Hall is named after, was a La Verne College faculty member for 36 years.

After the men’s panel finished their stories, attendees were ushered out to the chapel lawn for the dedication of the plaque.

Wagoner and Lieberman spoke to conclude the ceremony.

“That was such a beautiful hour,” Lieberman said.

“I think about those decisions and some of those decisions were hard and they were the right decisions for them. Those are the demonstrations of leadership that truly reflect who we are as a university,” she said.

The evening went on as attendees mingled with one another.

“To be honest, I hadn’t previously known there was an alternative to fighting in war, and hearing from the four men speak about their personal experiences and why they chose the paths they did, gave me the insight as to why it’s so important to commemorate their efforts,” sophomore business major Nicole Miller said.

The plaque, now the seventh of six dedication plaques to World War service around campus, is placed inside of the Interfaith Chapel.

Alana Glenn can be reached at alana.glenn@laverne.edu.