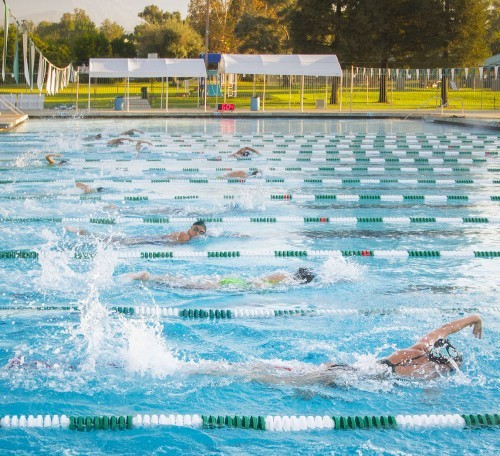 “The team this year is pretty decent with a lot of hard workers that have great talent,” Marc Okimura said. “We just have to get ahead when it comes down to it and prove our potential out there.”

The Leopards made its season debut on Oct. 19 at the Redlands Invitational.

Lovrensky had a fourth place finish in the women’s 200 medley race and fourth in the 200 individual medley in 2:16.2.

Senior Coleman Goode led the men by taking fifth in the 200 individual-medley with 2:08.83, sixth in the 100 breaststroke and seventh in the 200 backstroke.

Pat Skehan is head coach for the men’s and women’s swimming and diving for the second season for La Verne.

“Coach Pat is there to help us in and outside of the water,” senior Samary Morales said. “She is very dedicated and takes care of us very well.”

Before coming to La Verne, Skehan was the women’s head swimming coach for 22 seasons at Cal State Bakersfield and led the program to one of the nation’s top Division II programs.

She led Cal State Bakersfield to many top 10 placings and a total of five top 5 national finishes.

She also served as head coach for women’s swimming at the University of Rochester.

“I expect us to be real good this year and so far we are way ahead than we were last year,” Morales said. “We’re better and stronger and ever since Coach Pat came in, we’ve become a better team and I’m extremely happy.”

The new transfers and freshmen, along with the rest of the team have been pushing hard this season and have started really well.

“I feel like our team is really good and strong this year,” freshman Andrew Okimura said.

“Everyone is a great swimmer and we have a fun time every day at practice.”

At the Leopards debut at the Redlands Invitational, junior transfer Melissa Pryor finished fourth in the 200 freestyle, sixth in the 500 freestyle and eighth in the 200 individual medley.

Krislyn Cha placed sixth in the 200-breast stroke for the women.

“Both the transfers and freshmen are great and I can see potential in every single one of them,” Morales said. “They’re really strong, caring and friendly and one of the many reasons why I’m sad to leave for my last season.”

The next meet for the swim team is scheduled for 11 a.m. Saturday against Occidental at the La Verne Aquatic Center.