By Denisse Villalba, Kelly Serrano on November 17, 2000 in LV Life 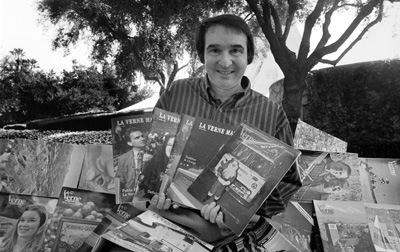 George Keeler, chair of the Communications Department and professor of journalism, has been the La Verne Magazine adviser for the past 18 years. He graduated from ULV in 1977 with degrees in music and journalism. Keeler took a sabbatical in spring and he took some time to write a history of the American Armenian International College (AAIC). / photo by Denisse Villalba

Although his sabbatical did not begin as he had planned, Keeler returned to the University of La Verne with an abundance of information and great stories to tell.

The first half of his sabbatical was spent on campus. Last spring the Communications Department was petitioning for more space on campus and as head of the department, Keeler worked through March trying to tie up loose ends.

From the end of March through May, Keeler was in bed with double pneumonia. The illness was not responding to any of the antibiotics his doctor prescribed, and eventually he was making daily trips to his doctors’ office for a shot and a chest X-ray. He said he has never been that sick before and said that it was a drag.

“It wasn’t too fun of a sabbatical in that way, ” said Keeler. “It makes me think twice about another sabbatical.”

Once Keeler overcame his illness, he knew that he had to do something of interest in order to come back and tell all of his students. His first goal was to write a history book of the American Armenian International College.

The building which students now know as the AAIC classrooms on Second and D street once housed a separate institution under the umbrella of ULV. For 19 years the AAIC was a valid college and Keeler found it important to document its history.

“For nearly 20 years there were people who were tied to the University of La Verne who wouldn’t have been here if it weren’t for the American Armenian International College,” said Keeler. “It was responsible for bringing a whole group of people to the La Verne community who are Armenian. They settled in La Verne because they went to school in La Verne. So it changed the population of the city.”

Keeler did finish piecing together the history of the AAIC and is now gathering photography for the book. Once it is finally complete, the alumni of the AAIC would like to have the book to sell and Keeler also said he thinks that ULV could make good use out of a piece of this history.

Although his sabbatical was theoretically over, Keeler set out on a second adventure in July. After being convinced by his wife, Jeanette to have fun, he used his frequent flier miles to take a trip to Germany for three weeks.

In Germany, Keeler took his camera equipment and his bicycle and set out to document the city of Schwarzenau, which is where the Church of the Brethren began.

The Church of the Brethren established ULV in 1891, and since has not had any professional documentation of its birth city. The purpose of Keeler’s trip was to document Schwarzenau through pictures and to write stories about his experiences to put on the Church of the Brethren’s web site. Keeler expects the web site to be complete by February.

After photographing Schwarzenau, Keeler went with friends on a bicycle ride through Germany to Holland. The trip took him down the Rhine River and the Mosel River from Frankfurt to Amsterdam, totaling about 800 miles.

“You can’t keep me in the bed too long,” Keeler said. “I saw that as my recovery. I decided to bicycle to get strong again.”

Once finally at home at the end of summer, Keeler began planning the Cuba trip ULV students will go on during the January interterm.

This was the second sabbatical for Keeler after 21 years at ULV. In his first sabbatical in 1984, he finished his doctorate at the University of Southern California. Keeler is an alumni of ULV, class of 1977, and comes from a long line of ULV graduates.

He is active at ULV as well as in the community. In addition to being chair of the Communications Department, he is an adviser to numerous students and a teacher of news reporting, internship, magazine and senior seminar. While on sabbatical, he missed the opportunity to host the California Intercollegiate Press Association (CIPA) which is a conference for student journalists. He had done most of the initial set up for the conference to be held at ULV, but was too sick to attend.

On the contrary, Keeler said that during his sabbatical he realized how petty some of the squabbles are within office politics. He says that he did not miss the politics involved with the ULV Space Committee and the University Council, both of which he is a member.

Keeler takes home the same dedication that he possesses on campus. He is an avid kayaker and bicyclist. At home Keeler is known as dad to his 2-year-old son Nathan.

“I have a great responsibility to be with my son,” he said.

A series designed to reveal questions and answers students may never ask or get answered by professors and staff.

·Perception of self in college: Involved in everything.

·Strangest job held: I was the movie projectionist at Canyon Theater in San Dimas.