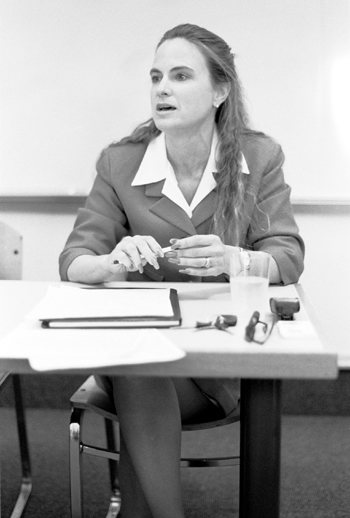 Calling attention to the injustices felt by middle and low-income laborers in the work force will bring equal opportunity and a stable economy.

This was the focus of a talk on economic justice March 12 during the University of La Verne’s third annual Organizing for Peace Conference last weekend.

“Economic justice is equal access and respecting all types of work and giving equal pay for all kinds of labor,” said Debbie Roberts, campus minister.

“A ‘day laborer’ is someone who works on a daily basis on a corner, waiting for people or employers to pick them up,” Nava said. “They are people seeking gainful employment on a daily basis.”

“Day labor” practices are illegal, so the city of Pomona started the Pomona Day Labor Center for people who do not have regular jobs. The center’s goal is to organize laborers with employers who only want people for day jobs or short-term services, Nava said.

The center protects the people who want to work, get paid and assure their rights, Suarez said.

“Many ‘day laborers’ are Hispanic ethnicity, speak mostly Spanish and a lot are not legal citizens,” Nava said. “But they are people who still deserve to be treated right and get paid after doing a service,”

Another issue of economic justice discussed was micro-lending.

“Micro-lending is a tool to fight against poverty to help from the bottom up,” said Dylan Kehoe, program manager and loan officer at Accion, a nonprofit micro-lending company.

Accion approves loans to people who get turned away from banks because of bad credit or other things that the banks consider to be risky investments.

“We give people the opportunity to build credit and then they can move on to a regular bank,” he said. It is about giving equal opportunities for people to succeed, he said.

Panelist Simone Makowski works for the United Food and Commercial Workers International Union. She just finished battling for rights of supermarket employees all over Southern California. She said her goal was to ensure a quality work environment, good pay, health benefits, job security, pensions and vacation time to the employees. She added that unions are important because they give a voice to the workers.

“Unions offer a better way of life through bargaining,” she said.

The panelists said giving people the opportunity to better their financial situation increases confidence, which has a good effect on the economy. According to the panelists, working people support the economy, so unemployment causes a drain on society.

The talk encouraged the public to get education, keep up communication, vote and support others fighting for economic justice.