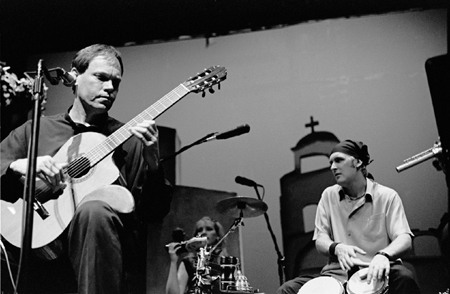 The show consisted of seven performers, including Michael Ryan, who started the band 10 years ago and has been playing guitar and singing for the last 20.

Some of the more professional performers are Ron Powell, another percussionist. Powell has played with pop musicians Kenny G and Madonna.

This talented group of artists joined together to create a magical evening of music.

Along with the music, the background, lit with soft blues, teals and turquoises, set a relaxing mood. As the colors heated to orange and red, the pace of the music followed.

“This was an excellent and intimate setting,” said Soderlund.

An accordion played as people filed into the theater already packed with students, faculty, and fans from ULV and surrounding communities.

Their distribution manager, Edward Fuller said, “It’s wonderful to be part of a group of people who spread the gift of music.”

The band played more than 13 songs, some deep and passionate while others made the audience dance around in their seats.

The crowd went crazy when Powell and Bennett played a percussion solo together, hitting and banging everything on the set.

“Mike Bennett outplayed me on the wall,” Powell said.

Together Powell and Bennett played over 50 different instruments from the percussion family. Almost everyone in the band played more than one instrument. They were passionate and demonstrated a great sense of timing.

Another highlight of the night was when Muradian, on the flute, came up with a blues song after he was given three topics from the audience: banana peels, soggy shoes and the war in Iraq. Using the topics, the crowd loved the song Muradian put together in just minutes.

“Personally, as a flute player, I get to put energy into the subtle and subdued,” Muradian said. “And every note I play gets heard. It fills my ego and I like that.”

The Ryans, Muradian and Soderlund can be heard every Thursday night at Casa de Salsa in Claremont. Ryan plays solo at the Candlelight Pavilion almost every night.

“Mike has brought a new feel to the place and I am just happy to be here having fun with a talented group of musicians,” said Mark Bollinger, co-owner of Candlelight Pavilion.

Ryan plans on developing a new set with a more Brazilian feel in the near future, but things are still up in the air.

“Tonight was great. You reap the benefits of rehearsing,” Smith said.

“It’s not about the noise on stage, it’s about the big hearts and good attitudes among the people you work with,” Bennett said.