By Eric Iberri, Lindsey Gooding on May 5, 2006 in Baseball, Sports 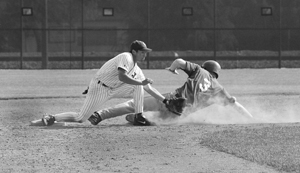 In a three-game series, University of La Verne lost to Cal Lutheran on Friday in an away game 8-0, coming back to win the first game in Saturday’s doubleheader at Ben Hines Field, with a 13-0 shutout. The Leopards were not able to keep up the pace in the second game on Saturday losing 3-12. In the sixth inning, shortstop Mike Terornes, tags out Cal Lutheran’s Justin Bogoyevac on a throw from La Verne pitcher Sal Diaz. The Leopards are ready to begin their off-season plans in hope of a better season next year. / photo by Lindsey Gooding

The La Verne baseball team ended its season at home as part of a three-game series against the Cal Lutheran Kingsmen.

The Leopards went 1-2 in the series.

The Leopards lost 8-0 on Friday to Cal Lutheran, but came back to win on Saturday at home 13-0.

Sophomore pitcher Ryan Rose picked up his sixth win of the season, allowing only six hits and no runs in nine innings pitched.

The exceptional pitching, paired with the Leopards’ strong at-bats, sealed the game.

But the Kingsmen returned the favor just hours later, ending Saturday’s doubleheader at 12-3.

This season was difficult for the Leopards, following back-to-back Southern California Intercollegiate Athletic Conference titles in 2004 and 2005.

With many seniors graduating this year, the team will need its returning players to take the reins.

“(Scott) Marcus is already a leader and he’ll still be here,” head coach Scott Winterburn said. “(Mark) Simmons is going to have to step it up to be a leader.”

“We have a strong pitching team to build around; we’re going to need to have a good recruitment,” he added.

Winterburn attributed problems this season to offense, but said that the players never gave up and always practiced hard.

“They’ll have a great squad. A lot of great pitchers are returning: Rose, Simmons, Young, and Neu,” Marty said. “We have awesome coaching too.”

These seniors are going to be greatly missed but not forgotten. They have set the standard for future Leopards. The team finished 6-12 in SCIAC and 17-20 overall.