By Emmah Obradovich, Lindsey Gooding on December 2, 2005 in News 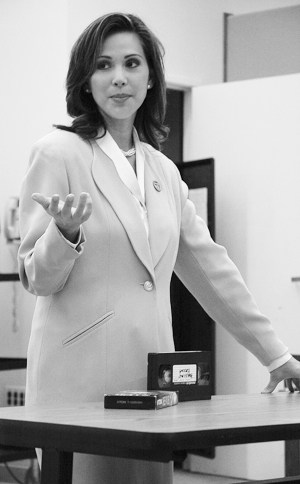 Addressing a group of more than 40 students and faculty in the Arts and Communications Building on Nov. 16, Karen Carlson, ABC 7 news anchor, spoke about her work as a reporter covering hurricane Katrina. Carlson experienced the tragedy first hand as she lived and worked out of her car and her photographer received a death threat, forcing them to change locations. / photo by Emmah Obradovich

As one of the first reporters on the scene in New Orleans, Carlson told moving first-hand stories, while Clayburg explained the weather tracking systems.

The University of La Verne student chapter of the Society of Professional Journalists hosted the event, held Nov. 16 in the Art and Communications building.

Carlson is an Emmy Award winner with a long list of accomplishments.

She used to be a weekend anchor in New Orleans; this is where she won her Emmy in 2002. That same year, she was also named one of the city’s “People to Watch.”

Clayburg is an Emmy nominee in addition to being named “Boston’s Best Meteorologist” by Improper Bostonian magazine. In recent years, Clayburg has worked for NBC in Boston, CBS in Minneapolis and is currently a freelance meteorologist in Los Angeles.

She also works in the television business and owns her own production company, Clayburg Creative Group LLC. Besides her job as a freelance meteorologist, Clayburg has a few new outdoor television shows coming out as well as a mentoring program.

In the aftermath of Hurricane Katrina, thousands of people were left homeless and stranded with no food or water for days, Carlson said.

She shared her own story of survival, which included sleeping in her car and narrowly escaping several violent scenes, which characterized the hurricane’s aftermath as thousands of people were left to live in the unbearably hot weather, among the sick and dying.

“Many thought the Hurricane was the worst,” Carlson said. “They felt abandoned and desperate.”

Carlson was reporting from Louisiana for a week, with no shower, very little sleep and little means of communication.

“We watched this thing come in,” Clayburg said. “It was really awful to watch.”

Today’s sophisticated weather tracking equipment means a better chance of warning people about such events. However, the power of a storm or hurricane can never be known until it happens, Clayburg said.

“With technology we can look at (weather) and predict what is going to happen, but you have to know about weather,” Clayburg said.

Carlson shared a few video clips from Louisiana allowing the audience to ?followed in the streets.

Carlson’s photographer even had his life threatened by a bystander, forcing Carlson to tape early and get out of the dangerous situation.

“After the (evacuation) buses stopped arriving, people became very agitated and that’s when the mood started to change, that’s when we had to break down the satellite and leave the location,” she said.

Victims began to turn against one another out of rage and desperation.

Because so much goes on after such an event, people removed from the situation tend not to fully comprehend what is going on. This is exactly what it was like for Carlson when she was reporting back to her newsroom.

“I think the whole situation was just so unbelievable that it was hard even for a newsroom to comprehend,” Carlson said.

“After they saw the pictures, they realized that the situation was far worse than the national media had initially reported,” she added.

People have a reason to believe a news anchor but making yourself trustworthy is key.

“It is important to look credible and know how and what story you are telling, you need to be able to communicate the message,” Clayburg said.

ULV students and faculty were shown how desperate people were and how badly they were treated.

They were also informed about how accurate weather reporting can be.

Carlson explained how those coordinating rescue efforts in Louisiana gave incorrect information only fueling the people’s anger and feelings of despair.

“People were waiting a long time to get out of town,” Carlson said.

“The information given was not clear to anyone,” she added.

Carlson reminded the audience that behind the anger there was love and fear.

Clayburg went over a few ways of tracking weather and being able to decipher what is going on.

Weather can be complicated even though it might look easy on television, Clayburg said.

“I love making complicated things easy to understand and that’s my job,” she added.

Both speakers shared the joys and challenges of their jobs with the audience of more than 40 students and faculty.

“The No. 1 quality about being a reporter is the ability to talk to anyone,” Carlson said. “The No. 1 skill is writing.”

“Karen has such a great amount of experience in both big and small areas,” said senior broadcast journalism major and SPJ Chapter Vice President Nick Montes.

Lindsey Gooding can be reached at gryde4ever@yahoo.com.