By Chris Weedon, Christina Worley on October 24, 2008 in Sports, Volleyball 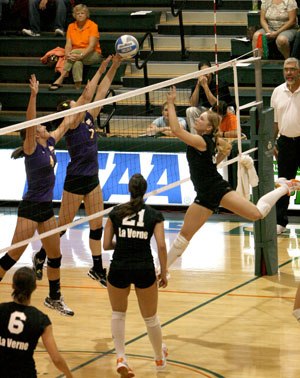 As La Verne sophomore Anna Calmer (No. 9) prepares to block a spike, Cal Lutheran sophomores Erin Exline (No. 4) and Megan Thorpe (No. 7) try to catch up with La Verne’s one-point lead in the fourth set. The final score was 3-1, with the University of La Verne winning its 17th match this season. The Leopards’ overall record now stands at 17-2 on the year. ULV plays tonight at Redlands at 7:30 p.m. and then again on Saturday at Occidental at 6 p.m. / photo by Christina Worley

Homecoming is in the air. There’s noise coming from Campus Activities Board events. Students are all about showing off their green and orange pride. The football team is preparing for the big game.

And among all the hustle and bustle, the volleyball team is back in action to avenge its losses of a week ago and get back to its winning ways, going undefeated with a 3-0 record this past week including a big conference win.

Following a less than ideal weekend against the nation’s top two teams, Juniata and Emory, La Verne hosted Lakeland last Friday afternoon with a mission to take out its loss on a lesser Lakeland team, and the women did just that, in three straight sets.

“We’re doing a really good job of transferring things we’ve done in practice into the games. It’s nice to get back on track. We learned some things about ourselves. We can beat the No. 1 team in the nation on any given night. We got that taste. We’re training in some areas to add to our strengths,” head coach Don Flora said.

After a somewhat close first set which ended in a final score of 25-21 in favor of the home team, La Verne would pour on its superior talent and resolve for winning and run away with the final two match sets, 25-11 and 25-9.

Despite an impressive Friday afternoon win, it was Friday night’s Homecoming game that showcased what makes La Verne volleyball the No. 3 team in the nation.

Not only did the women pull off an imposing victory, but they also did it in an exciting fashion in front of the home crowd.

The match would only last three sets with the first two ending in approval of La Verne fans with scores of 25-21 and 25-17.

Homecoming had special meaning to the team after being away last year at this time.

“Homecoming helps you crank up the energy. We are already trying to set Homecoming for 2009 in order to have a quality match for Friday night,” Flora said.

Following their strong weekend, La Verne was host to conference rival Cal Lutheran on Tuesday, which as history has proven, would be a tough match for ULV.

Cal Lutheran was the only conference opponent to take the Leopards to a deciding fifth set a year ago, and this year the Regals were determined to give the Leopards another tough match.

Throughout the season, the team’s main theme has been the idea of “intensity and calm” and the balance of the two, according to Flora. This motto was practiced by the women Tuesday night.

“They never got flustered,” he said.

Cal Lutheran and its fans came into the La Verne tents intent on making a run at the conference leader despite having their top outside hitter and All-Conference player Summer P. Newman out with an injury.

Even with one of their top players out, the Regals were still able to be the first conference team to take a game off the Leopards.

“They cheered together. They made their numbers seem larger, and it made the game that much more exciting, ” said Kim Rampaul, communications major and La Verne volleyball enthusiast.

In route to their fourth set victory, the Leopards had to fight off two set points for CLU before coming back to win.

Flora commented on the outstanding play of all of his players, but discussed two who stood out this week.

“Yesenia Lopez is an underrated setter. She has done a great job distributing and balancing our offense. Ashley Morgado’s blocking has really stepped up and has been more efficient on hitting. Both have become good leaders as juniors,” Flora said.

The Leopards play again tonight at Redlands at 7:30 p.m.

This will be followed by a match at Occidental on Saturday at 6 p.m.

The team will then square off against the Pomona-Pitzer Sagehens at Frantz Court on Tuesday at 7:30 p.m.

Chris Weedon can be reached at christopher.weedon@laverne.edu.