By Christina Worley, Jonathan Smith on September 26, 2008 in Sports, Volleyball 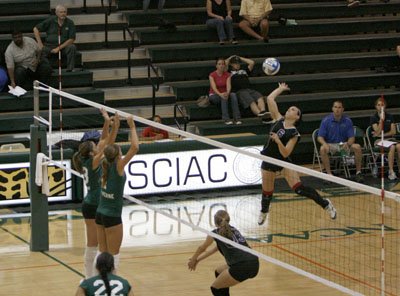 Successful defensive efforts by Samantha McCosh and Crista Jones helped La Verne to win the first set of the home opener against the New York University Violets (25-19). The Leopards dominated the garden as the Violets wilted in all three sets for a final score of 3-0. La Verne’s overall record now stands at 8-0. The Leopards host Redlands on Friday at Frantz Court at 7 p.m. / photo by Christina Worley

The women’s volleyball team was in a “New York state of mind” Sept. 19 as the Leopards defeated visiting New York University, 3-0, in front of more than 500 fans at Frantz Athletic Court.

The Leopards managed to keep their California foes in check as they coasted to a three game sweep against conference rival Cal Lutheran Tuesday.

The game against NYU was the home opener for the Leopards, as they played for their home crowd and fans. ULV improved their overall record to 8-0.

“We were really excited,” senior outside hitter Brianna Gonzales said about the Cal Lu game. “We came out with a lot of energy, and we were strong mentally.”

ULV was in control throughout the match against the 19th ranked Regals, holding standout Cal Lu senior Summer Plante-Newman to just six kills and an ace.

“We definitely had to set the standard,” junior middle blocker Ashley Morgado said. “We knew if we let them in the first game, it would have let them think they could play us.”

Cal Lu pulled away early in the second game, leading, 5-1.

But the Leopards came roaring back to win the set, 25-18.

And everything was the same for the Leopards in the third game, as they won, 25-16.

“Game three, we had the confidence, and we really wanted to win,” Morgado said.

“Throughout the entire match, we kept our calm and stayed together as a team,” sophomore outside hitter Rebecca Villanueva said.

Gonzales tallied a double-double with 14 kills and 16 digs to lead the match.

Against NYU, the Leopards saw similar success, as they were able to completely dominate the visiting Violets.

“I think we had a good match tonight,” assistant coach Erika Chidester said after the NYU game. “It was better than the Chapman match. We had a lot more offense.”

“We did a good job at keeping our intensity,” senior outside hitter Brianna Gonzales said after the NYU game. “Our energy was up the whole game.”

However, that was the closest they got to the Leopards, as they were able to pull it away after a kill by junior middle blocker Crista Jones to go up 24-17.

“We knew that we were catching up,” Gonzales said. “We just took it one point at a time.”

The second game saw a similar lead for the Leopards, as Gonzales hit the ball on the back of the court to lead 6-3.

ULV continued its dominance to their largest lead of the match after a kill by Jones to make the score 19-6.

“After the first game, we were able to come back and get it done,” Gonzales said. “We focused on the little things, the fundamentals.”

In game three, the Leopards pulled away after a massive kill by Jones that planted into a NYU defender.

“It’s exciting, but you’ve got to stay in the game,” Jones said about the hit.

The Leopards were running on all cylinders during the match. After the match, Chidester explained that the team worked on their serving and blocking during the week.

“Every single game I try to go out and do my best with energy and focus,” Jones said.

“Crista had a good match, so did Brianna,” Chidester said. “They’re always our most consistent players.”

Team chemistry was also on the display during the match as the Leopards presented several different looks for NYU.

“We work really well together,” Jones said. “The thing about our team is that we have good athletes. Anybody on the sideline can come in and play.”

The Leopards look to start off fresh and strong as they gear up for the rest of their season.

Conference play continues for the Leopards, as they face SCIAC foes Redlands and Occidental this weekend.

“Cal Lu is done with; now we can focus on Redlands,” Morgado said.

“We just have to play our game,” Chidester said. “If we don’t take care of our side of the net, then we’re not going to be successful.”

“We need to start off faster in the game, start off stronger,” Sleight said.