By Chris Weedon, Walter Mansilla on December 12, 2008 in Sports, Volleyball 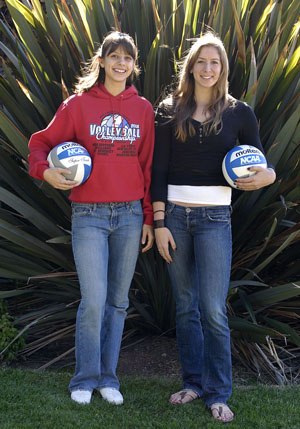 For the 2008 volleyball season the American Volleyball Coaches Association (AVCA) selected senior Brianna Gonzales and junior Crista Jones as First Team All Americans. This is the first time since 1982 that two players from the same team at La Verne have received these honors. / photo by Walter Mansilla

For most true college athletes, nothing is more important then marks in the win column for their team. But when it comes to personal accolades, none is more prestigious than All-American.

This year, the women’s volleyball team returns two players to the American Volleyball Coaches Association (AVCA) First Team All-America for the first time in 26 years in the form of Brianna Gonzales and Crista Jones.

Jones and Gonzales were only SCIAC players to be named to the First Team.

“They both were offensive threats. They were both fantastic leaders for the team. Their hard work all year long is what got us to the national championship,” head coach Don Flora said.

Jones, a junior middle blocker, ended the season on a high note, being named the SCIAC Player of the Week for the final week of the season.

For the year, Jones posted 257 kills, while at the same time leading the team in hitting percentage (.344) and blocks with 80.

She was also named to a All-West Regionals team, All-Tournament at nationals and First Team All-SCIAC for her contributions to the team this season.

“It feels really good to have gotten this award. The big thing though is our team making it to the national championship game. This award is just icing on the cake,” Jones said.

Now that the season is over, sights for the team have already turned to next year’s campaign.

“Every season we go into it with goals. First is to win SCIAC, and second is to make an appearance in Nationals in the Elite 8. We are already back in the weight room working on our conditioning for next year,” Jones said.

“She is one of the most dominant players in the country at her position. Her skill level is still just growing as she understands the demands of the job. Her future is as bright as anyone in the country,” Flora said about Jones.

With the end of the 2008 season, comes the end of an illustrious career for Gonzales at La Verne.

In her four years as a member of the Leopard program, she has been Second Team All-SCIAC twice as a freshman and sophomore, conference player of the week seven times, including three this past season, plus SCIAC Conference Player of the Year twice, as well as Most Out­standing Player in the West Region championships and a spot on the All- Tounrament team at the nationals.

Not to mention, this is not her first time as an All-American, having been named to the First Team last year as well.

“Honestly, I’ve just worked hard since my freshman season. When I start each season, I don’t think about personal awards. I think about what I can do to help the team win. I’m working hard for my spot and my playing time. I just think a lot of hard work and focus goes into those goals,” Gonzales said.

This season, Gonzales racked up a team leading 353 kills en route to her accolades.

“It’s a phenomenal story of the progress she has made in four years. Hard work is hard work when getting better in volleyball. She has done everything and more that this program has asked of her,” Flora said. “This program has had phenomenal players for many years, and she ranks up there with the best of them,” he added.

“Both of them are fantastic examples of what La Verne volleyball is all about,” Flora said.

Unfortunately this was Gonzales’ final season in a Leopard uniform, but luckily for the program, Jones will be back next season to try and help the team add to its 28 straight conference wins, and make it a perfect 10 conference titles in a row, thus earning a trip back to the national championship, and— if all goes well—a win.

Christopher Weedon can be reached at christopher.weedon@laverne.edu.