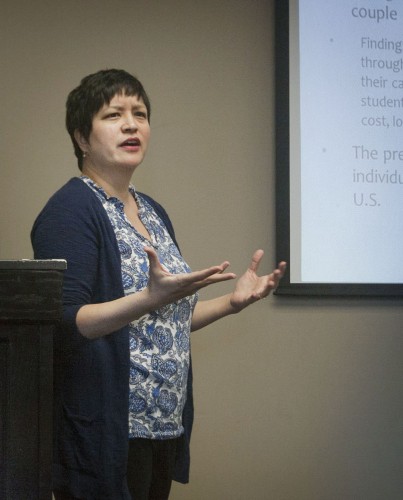 Nadine Nakamura, assistant professor of psychology, lectured about the emotional strains of same-sex binational couples in California Monday in the Presidents Dining Room.

Nakamura described the hardships of couples she interviewed in her qualitative study last year, which she conducted before June 2013.

As Nakamura defined it, same-sex binational couples are people who are in a same-sex relationship but the partner is from a different country or has a diverse citizen status.

“Before the June 2013 Supreme Court ruling that struck down Section 3 of the Defense Marriage Act, same-sex binational couples in California had many challenges,” Nakamura said.

Nakamura read quotes from her participants explaining the difficulties each faced in the relationship.

“The way she used the quotes in her presentation — it made it more real,” said Brittney Britt, sophomore creative writing major.

Couples experienced loss of appetite, depression, fear and anger as a result of a stressful relationship, Nakamura said.

In addition to the social challenges of being gay, Nakamura said same-sex binational couples carried different worries other same-sex couples did not have.

“They have to live in a constant state of paranoia because they might be deported,” said Miranda Ramirez, sophomore kinesiology major.

“Many people in this type of situation tried to stay in the country by continuing to receive a higher level of education in order to qualify for a student visa,” Nakamura said.

She said other people had difficulty finding a job because some did not have a work visa — employers did not want to invest money on someone without proper documentation.

“Stress is put on the people in the relationship because of money problems,” Nakamura said.

“It really opened my eyes to the fact that everyone struggles with the immigration laws,” Britt said.

Even when couples do apply for visas, the process can take a while and the couple cannot leave the country.

“Same-sex binational couples have said they could not attend certain events or see family out of the country or state,” Nakamura said.

“They are afraid they cannot return or will be deported,” she said.

She held individual interviews with 23 people, aged 20 through 70.

Nakamura said that the demographics alone kept the topic interesting.

With a partner from another country, four participants were married, nine were in a domestic relationship and 10 stated they were in long term commitment.

“I wanted to capture each participant’s unique view,” Nakamura said.

Britt said that she enjoyed that the lecture focused on a social issue, which she said made it was more significant.

Nakamura said the problem, even since June 2013, is not solved.

Nakamura said she wonders if more problems will arise from judges deciding whether a same-sex binational couple receives all the rights.

“Even though I did not relate to the topic, Nakamura really took her time and crafted this study on a topic that is not very well-known,” Ramirez said.

“One thing Nakamura said that really stood out was that we take a lot of our policies and laws for granted when they do not apply to us,” she said.

Nakamura’s past lectures have focused on gay immigrant citizenship and has published many works on both issues.

Gabriela Krupa can be reached at gabriela.krupa@laverne.edu.