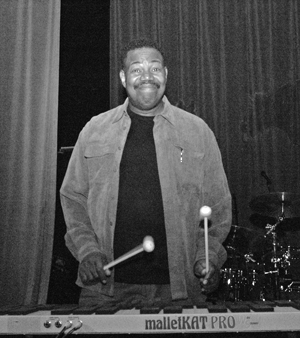 Ndugu Chancler, a member of IGABA, the percussion ensemble, is a drummer, percussionist, producer, composer, clinician and teacher. He was the drummer for Michael Jackson’s “Thriller” and provided the beat for the song “Billie Jean.” / photo by Maria Villalpando

Many performances let the audience ease back into their seats to enjoy the show.

Instead more than 70 people stayed at the edge of their seats to watch IGABA – a percussion ensemble featuring Ron Powell, Ndugu Chancler, Nat Scott II and Mike Bennett – perform a series of rhythmic drum melodies Friday night in Founders Auditorium.

Presented by the University of La Verne’s music department, IGABA’s untamed spirit was apparent from the very beginning of the show.

The percussion group began with a piece in which each drumbeat started as a sleepy whisper that invited the audience to the roots of Africa.

The song unexpectedly climaxed into a chorus of booms to wake listeners.

Afterward IGABA swept the audience across the Atlantic with a calypso piece that held everyone captive.

It took them into the past of an Afro-Caribbean closet world when African slaves communicated through song.

Neither the band nor the audience remained entirely seated.

IGABA invited the crowd on stage to dance to a game of limbo and Steve Biondo, music department coordinator, went on stage and played the djembe drum with the group.

“It was a cultural experience,” Biondo said.

“I was just floating somewhere up there above the stage,” he added.

Although the evening featured four musicians, the pulsating grooves seemed to create an entire village of sound, whereby more than 45 instruments were used.

Some of the exotic drums included cajones, which were shaped like boxes, and another drum called a berimbau, which looked like an arrow with a shell attached to it.

“Anyone of us could change chairs with the other guy and play their instruments,” Powell said.

Powell sang in multiple languages including Spanish to add to the group’s musical journey from West Africa to Brazil.

He later brought the evening back to the streets of New York and Los Angeles during his rap performance.

The evening also featured solos but each member’s individual part throughout the show was integral to the particular rhythms from the different countries, Scott said.

IGABA, which means the drum, originally started almost five years ago when Powell and 20 other percussionists opened a show for rock singer Rod Stewart.

Their tour schedule allowed Chancler and Bennett to participate as guest percussionists.

Powell, who helped direct the show, has been a highly recognized musician in the music business for 28 years.

He has worked with such artists as Madonna, Kenny G. and Sergio Mendes.

Scott is known for his big ears and has become somewhat of a go-to drummer throughout the years, providing the rhythmic foundation all musicians need to enhance a song.

Chancler, who made his debut performance in IGABA at the show as a drummer, percussionist, producer, composer, clinician and educator, has worked with musical greats such as Frank Sinatra and Michael Jackson.

Bennett graduated from ULV in 2004 and is a new faculty member at the music department.

He is only 23-years-old and has been recognized by Downbeat Magazine as the second best college drummer in the country.

“We all hit things for a living and it’s the greatest job in the world,” Bennett said.

For the final song of the show, IGABA distributed instruments to the audience, enabling them to play along.

“Everyone has an inner rhythm and an inner pulse,” Chancler said.

“We just try to pull that out of them,” he added.