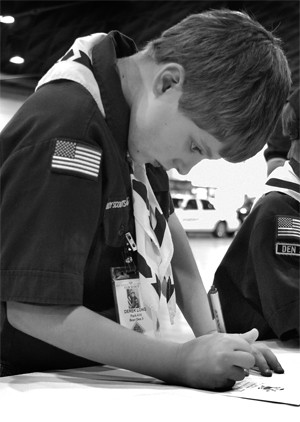 Members of Upland Boy Scout Pack 614 enjoyed the events of the police expo, held Saturday at the Fairplex. More than 50 police departments participated in the event, which included K-9 demos, displays of guns and cars. Boy Scout Derek Long participated by writing a card for a United States soldier in Iraq at the “Soldiers’ Angels’” booth. Soldiers’ Angels’ mission is to provide aid and comfort to those serving in the military. / photo by Rhiannon Mim

Police departments and other law enforcement agencies from all over California gathered at the Police Expo to offer a day of recruitment opportunities Saturday at the Fairplex in Pomona.

Booths from about 20 police departments, outlined the facility where agencies showered attendees with brochures, displayed posters filled with photos of agents in the field and set up TV monitors that showcased officers in training.

An extension of police cars, bikes and trucks were parked in the center of the building, separating the two rows of booths.

Less ubiquitous items also on display included a sniper rifle, bullet-resistant vest and Taser X26, which is a stun device that exerts five seconds of electricity.

Yet one similarity that all the departments shared was the need for qualified applicants.

“The world is always at a need for help,” Steve Wakimoto, Pasadena resident, said. “It’s always something that will be in demand and there will never be any downsizing.”

The city of Los Angeles in particular had a chief reason for wanting to fill its vacancies.

“We’re the No. 2 terrorist target in the United States after New York City,” said Devin Staten, officer at the Los Angeles Airport Police Department. “And No. 1 on the West Coast.”

Although the law enforcement arena remains a predominantly male profession, there are several advantages women have over their male counterparts.

“Females are really good because a lot of times instead of escalating things to fight we can talk a lot of things out,” said Debbie Adams, patrol officer at the San Francisco Police Department.

People are misinformed about how the police treat civilians because television does not portray all of the laws that officers are governed by, Adams said.

A family security seminar by Abduction Busters added to the expo attractions and showed guests techniques to use against potential kidnappers.

In the worst case scenario; the best chance for escape when kidnapped is to sit in the front seat of the car and mess with the gas pedal during a red light in order to distract the kidnapper and maneuver for escape, said Robert Haynes, owner of Abduction Busters.

Other features at the expo included a massage and day spa company, fitness equipment business, a nonprofit online organization that sends care packages to soldiers overseas and a canine show.

The expo was sponsored by the California Organization of Police and Sheriffs.