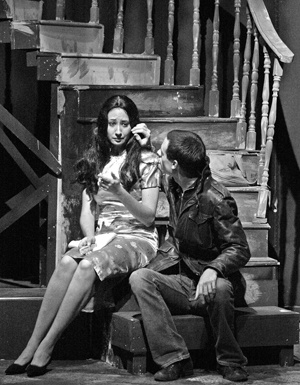 “The Good Woman of Setzuan,” by Bertolt Brecht, brought together junior Tanya Wilkins, who played Shen Te, and sophomore Sam Guzik, who played Yang Sun. During a rain storm Yang Sun consoles Shen Te, who is without resources to repay her debts. / photo by Sergio Sandoval

The yin called on the yang in an enthralling twist addressing society’s everlasting struggle to be moral in “The Good Woman of Setzuan” by Bertolt Brecht on Saturday at the Dailey Theatre.

Adapted as a senior project by Zach Johnson, the play chronicled the double life of a woman named Shen Te in her quest to fulfill the gods’ demand to live a virtuous life.

Adding to the complex plot were oriental lights that hung on the set’s shack-like buildings and water effects that rained down into the open sewers, creating the play’s Chinese slum environment.

“It’s got a little of everything,” said Flor Castillo, a Whittier resident. “It’s romance and a little of fantasy with the gods.”

Like other Brechtian plays, “Good Woman” maintained its spirit of epic theater and presented a forum for debate rather than resting as entertainment.

Johnson’s character, Wong, a water seller and confidant to the gods, opened the play in a non-traditional manner by directly addressing the audience of nearly 100.

Throughout Shen Te’s struggle to be charitable toward her townspeople without becoming their pawn, the comedic acting of the gods and slum folk kept the audience emotionally distant.

This allowed viewers to objectively evaluate the morality of the story.

It was not until near the story’s end that the townspeople realized that Shui Ta and Shen Te were the same person, allowing her to balance her own needs with those of society.

“Shen Te was the most difficult,” said Tanya Wilkins, a junior theater arts major who played both characters. “Playing a bad person is the easiest thing to do; playing a good person who’s the central character of the play is very difficult because you can’t be too boring.”

“It’s designed not only to be a production for the audience but also to be a growthful experience for our student actors so that each time they do a play, they will improve their theatrical education,” said Steven Kent, director of theater, who directed and composed music for the play.

“The most important thing that I’ve learned in theater started when I transferred here as a sophomore and that was just to be available,” Johnson. said.

“Being prepared for anything to me is just setting yourself up for success,” he added.

About 45 people comprised the crew to prepare for each performance that had a cast of more than 30, Kent said.

Johnson decided to commit to “ Good Woman” as his senior project last year during his time studying abroad in England when he read the script and fell in love with Wong’s diverse characters.

“I love working with Zach because he constantly pushes the boundaries of the characters and grabs more out of you than you would have ever expected that you had,” Wilkins said.