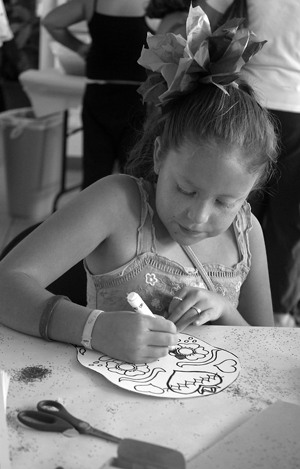 Children and adults gathered to honor Dia de los Muertos in a celebration that featured an art workshop and an altar display for the departed Saturday at the Cal Poly Pomona Downtown Center.

Dia de los Muertos (“Day of the Dead”) is a predominantly Mexican holiday celebrated every year on Nov. 1 to honor the dead.

It is believed that the spirits rise on Oct. 31 and leave on Nov. 2.

“It’s a way to connect with your ancestors but it’s also a way of not making death such a scary and fearful experience,” Cybele Garcia, Downtown Center coordinator, said.

The program featured a three-part art workshop for attendees to make festive items such as colorful skeleton masks, decorative flowers made of tissue paper and edible skull treats that were frosted with sugar.

A more sacred corner lied next door in the West Gallery where an altar was set up.

Many participants used the items they made from the workshops and left them as ofrendas, or offerings, on the altar’s table to welcome the spirits home.

Others also wrote messages to loved ones and placed them in a basket that the Center later burned on Tuesday to symbolically deliver them to the departed.

A display of eight ceramic and two paper maché whimsically dressed skeletons stood inside a glass box as part of the altar’s decorations to commemorate many important figures in Mexican culture.

On top of the altar more skeleton symbols hung in the form of multiple-colored paper picados, which are intricate tissue paper cutouts.

The program also treated attendees to sugar bread which represented pan de muerto, or bread of the dead, that many families share during the holiday.

The Downtown Center started the program last year because it helped reflect the heritage of the city’s predominantly Latino community, Garcia said.

However like many traditions that have been integrated into the American culture, Dia de los Muertos has remained strongest in Mexico where it began more than 3,000 years ago.

“In Mexico it’s very different,” Raul Baltazar, volunteer, said. “People actually take it more to heart and they really get into going to the cemeteries.”

Families who visit the graves traditionally offer alcohol for adult spirits and many bring toys for the deceased children, whom they call “los angelitos,” or little angels.

Other popular customs include placing a picture of deceased loved ones out on display and singing their favorite songs.

Some people even paint their faces like to resemble skeletons, as a way of embracing death.

The Bells’ Toll on Rock ‘n’ Roll: ‘There walks a lady we all know’
Art conveys tradition, memories