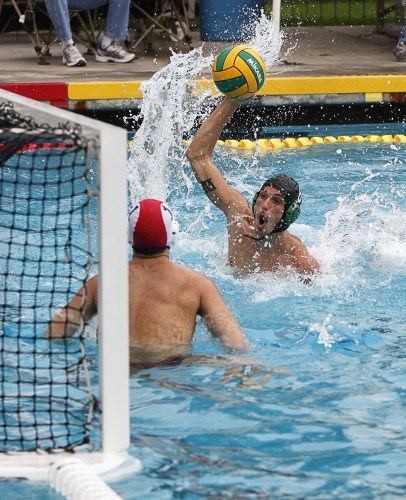 La Verne junior Kyle Thorsness breaks through the Vanguard defense to score for the Leopards on Saturday. The Leopards fell to the Lions, 15-13, despite a late fourth quarter comeback. The loss dropped the Leopards’ record to 5-16 overall and 1-2 in conference play. / photo by Garrett Gutierrez

Poor refereeing and missed opportunities led to back-to-back losses for the men’s water polo team as it faced Cal Lutheran and Vanguard on Saturday at Las Flores Park.

The Leopards’ first game of the day was against Southern California Intercollegiate Ath­letic Conference opponent Cal Lutheran who got out to a fast start against the Leopards, taking a 3-1 lead.

The first few goals by Cal Lutheran seemed to stem from defensive mistakes, as many of Cal Lutheran’s players were uncovered when they scored.

“We didn’t play good defense, in the first quarter we just let too many go,” said third-year head coach Alex La. “We’re a better team but we weren’t defensively aware of what was going on, just simple things like looking left and right.”

Although the defense struggled at times, the Leopards were able keep it close with Cal Lutheran all game.

La Verne was able to respond to almost every goal that Cal Lutheran put on the board.

Junior Andrew Mackay was able to keep it close heading into the half when he scored and then flexed to the crowed.

The Leopards were able to score first in the second half and tie the game up at 7.

It seemed that the team had made some adjustments at the half but that was short lived.

Cal Lutheran was able to break the tie and outscored the Leopards 4-1 for the rest of the third quarter, pushing the score to 11-8.

“We had a lot of offensives which cut many of our opportunities,” freshman player Max Brown said.

Heading into the fourth quarter, the fans were alive and into the game.

Many of them being highly upset with missed calls from the referees. There were many fouls that went uncalled.

“Officiating is always terrible, you never look at it as you’re going to get a good official every game,” La said.

“It’s always going to be bad and that’s the way you have to look at it, [we] just have to break through adversity.”

The Leopards battled through all of the different circumstances that were thrown their way, but Cal Lutheran was just a little bit too much for them and were able to finish with a final score of 14-10.

“We should have won that game,” fan Alicia Wong said. “They played very well and were cheated out of that one.”

“We’ve been going with a couple of starters, they just didn’t come through for us, so we’re going to give some people some chances to hopefully light some fire under some of the other guys,” La said.

The Leopards second game against Vanguard was another physical and close game, but La Verne just didn’t have the endurance to finish them off, and were defeated 15-13. Junior Kyle Thorsness scored four goals for La Verne and freshman Ryan Stanley scored three.

“Cal Lu was really fast, and we got tired when we played Vanguard,” Brown said. “We’re still practicing hard, we just need to keep playing hard because we have been playing teams ranked higher than us and we’ve been getting really close.”

The Leopards redeemed themselves Wednesday as they beat Whittier 7-6 in a tightly played game. The team looks to gain some momentum this weekend with two road games.

At 10 a.m. tomorrow La Verne will continue with SCIAC play as it faces Claremont-Mudd-Scripps (10-9) in Claremont, then travels to Riverside at 2 p.m. where it will play Cal Baptist.