By Garrett Gutierrez, Kristen Campbell on November 5, 2010 in LV Life 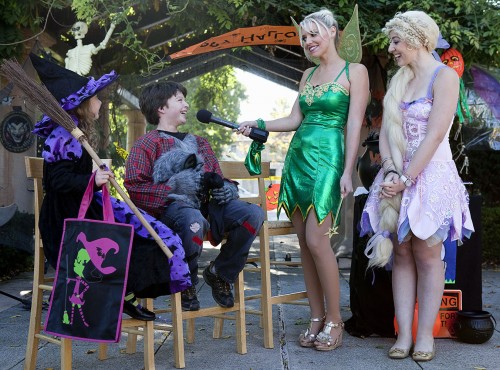 LVTV’s Jennifer Barlow and Taline Baghdadlian interview and hear jokes from Nathan and Rebecca Keeler at the annual Halloween Spooktacular on Saturday in Mainiero Square. This is LVTV’s second year participating in the downtown trick-or-treating event. It offers a safe area for kids to go trick-or-treating and to be featured on live television. / photo by Garrett Gutierrez

Many residents of La Verne and surrounding areas came to check out the Halloween adventure in Old Town La Verne on Saturday afternoon.

Merchants like Warehouse Pizza, Roberta’s Village Inn and Sigal Diamonds, sat outside their businesses handing candy to trick-or-treaters that came their way.

Children dressed as witches and werewolves waited in line to have their faces painted with pumpkins, bats and other Halloween-themed artwork and for balloon animals and swords as they awaited the beginning of the day’s main festivities.

“The Spooktacular event is put on annually as a safe way for kids to trick-or-treat,” Amy Altomare, city representative, said. “This is the second year LVTV has become a participant and it is a lot of fun for the children to be on television.”

Dressed up as Spiderman, Teenage Mutant Ninja Turtles and more, children were able to tell jokes and send their Halloween wishes to friends with help from La Verne Community Television on the live, interactive TV show, “Halloween Spooktacular” in downtown’s Mainiero Square.

Throughout the program, both Barlow and Baghdadlian told Halloween jokes, greeted their young guests and shared safe trick or treating tips with them.

“I told the TV people I love Star Wars and to have a Happy Halloween,” Adam Devereaux, 7-year old La Verne resident, said. “It is really cool to be on TV dressed as Captain Rex.”

Altomare and other city workers interrupted the program to announce this year’s Halloween Coloring Contest winners. Child artists, ages 3 through 12, were separated into four categories. The children who entered were allowed to color a picture of a flying witch in any way they pleased.

In each of the age categories, there were three winners, each receiving an age-appropriate art prize. The four first-place winners were Cassandra Schwass, Tiffany Sara Martinez, Kelly Huang and Breanna Thompson.

“I colored my witch with a lot of colors,” Maryssa Newell, third place winner in the 7-year-old to 9-year-old category, said. “I want to use my art desk right now, but my mom said I had to wait.”

In the middle of the program, Billy Bob, played by Professor of Communications Don Pol­lock, rode in on a moped scooter to join in the fun. He proceeded to complain to Barlow and Baghdadlian that adults should not trick-or-treat, but rather buy their own candy, which received laughs from audience members.

“My family comes to this event every year,” Mike Lacy, La Verne resident, said. “My wife and I bring our grandkids because it is a safe way to celebrate the holiday. I like to say we are an all-La Verne family.”

At certain points of the program, magic video clips and Halloween themed videos were played for those watching at home.

The show was cablecast during the weekend and will replay in November on LVTV-3, Time Warner Cable.