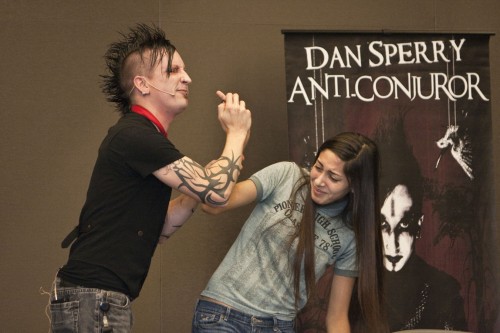 Magician Dan Sperry and audience assistant Michelle Bedolla, a student at La Verne, started the show with a shocking and dark performance of magic. Sperry, a finalist on the “America’s Got Talent” television show, defied reality in front of a full house at the Campus Center on Monday as part of the University’s Halloweek events during the week leading up to Halloween. / photo by Scott Mirmanian

Magician Dan Sperry does not like performing card tricks. In fact, the only cards he uses in his show are to demonstrate an almost inappropriate poem about kings and queens that he said he wrote when he was 8 years old.

“People like to be scared,” he said. “Nobody wants to see the same old card tricks.”

His show is part gore, part magic and full of shock value. Which is why the Campus Activities Board invited him back to the University of La Verne as part of Halloweek, a week long celebration of everything scary to get students ready for Halloween.

Sperry entertained the crowd at ULV in May and was such a hit that CAB decided to showcase his talents again.

“He was a huge hit again,” said Ally Schultz, who coordinated the event. “I thought it was really successful and the audience seemed to really enjoy it.”

Sperry is a rather morbid looking guy, with a black Mohawk and bangs that fall into his face.

He wore black platforms and a black shirt, complete with a red tie.

And it is not just his appearance that is creepy. During the show, Sperry utilized suspense and horror to achieve magical bliss.

“I thought it was really cool,” Ramon Montoya, freshman political science major, said. “I thought magic was stupid before, but now I think it’s pretty tight.”

One of the more shocking tricks was when Sperry placed a quarter into his eye until it seemingly disappeared.

In order to retrieve the quarter, he cut open his arm, revealing the coin inside as blood dripped down to his hands. The crowd was in shock.

“I enjoyed it, it was a bit scary but fun,” Jesus Vargas-Lopez, sophomore international relations major, said.

Sperry also integrated humor into his act. Roars of laughter were heard throughout the performance.

To take the edge off of some of the scary parts, Sperry played childlike music or songs that revolved around his tricks.

For example, while performing a mind-reading deception, he asked a man in the audience for his favorite female singer. While waiting for an answer, Sperry played Michael Jackson in the background.

“He was interesting, to say the least,” Ryan Gann, photography and liberal studies major, said. “I thought it was hilarious.”

Sperry has been practicing magic since he was 10 years old. Most recently, he performed 90 shows in Las Vegas at Circus Circus.

Sperry was also a runner-up on last season’s America’s Got Talent.

“I didn’t take the show seriously,” Sperry said. “I thought it would be a way to get more YouTube hits, but it has been a crazy ride.”

To end his show at the University of La Verne, Sperry performed one of his popular tricks from his time on America’s Got Talent.

After chewing and swallowing a Life Saver mint, Sperry pulled out a long strand of floss, and stretched it across his neck. To the audience, it appeared that he was flossing through his neck under his skin.

The most amazing part was when he pulled out the floss, and the Lifesaver was on the strand. The audience erupted with cheers and stayed after to greet him and purchase DVDs and t-shirts.

“I love getting to come back to places,” Sperry said. “It’s always good to come back when you are well received.”

Correction
The name of Michelle Bedolla was misspelled in the photo caption of “Dan Sperry startles ULV students” in the Oct. 29, 2010, issue of the Campus Times. The Campus Times regrets the error.