By Garrett Gutierrez, Justin Davis-Battle on November 12, 2010 in Football, Sports 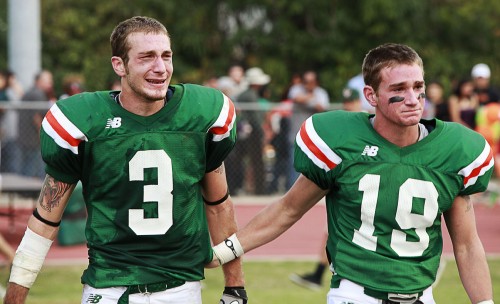 Brothers Matt Griffin and William Griffin console each other after the football team’s triple overtime loss to Pomona-Pitzer at Homecoming on Saturday. The Leopards staged a 14-point fourth-quarter comeback to take the game into overtime, but a failed two-point conversion in the third extra period to lose, 28-26. The team is 0-8 for the season and has lost 19 straight games. / photo by Garrett Gutierrez

With both the Pomona-Pitzer Sagehens and the La Verne Leopards in search of their first win of the season, something had to give. Unfortunately the Leopards fell short.

The Sagehens and Leopards battled through 60 minutes of regulation and three additional overtimes to come out with a final score of 28-26. In front of 1,026 Homecoming fans Saturday at Ortmayer Stadium.

Pomona-Pitzer enjoyed a great start, scoring on its first two possessions to take a 13-0 first quarter advantage. Pomona would miss an extra point, which contributed to a wild finish.

The Leopards’ defense played great, generating pressure and forcing turnovers. Held scoreless in the first half, La Verne’s offense came to life in the second, finding the end zone on its first possession of the third quarter. Quarterback Thomas Arguello fired a 38-yard dart to Chad Lucas with 12:14 remaining in the period to close the gap to 13-6. The Leopards would also miss the ensuing extra point.

Late in the third, the Sagehens would continue to extend its lead after completing an eight-play, 79-yard drive in 4:06, capped off with a 1-yard plunge from Jacob Caron to seize a 20-6 cushion.

La Verne was able to come back from that fourth-quarter deficit with the help of both its offense and defense. The Leopards where able to march down field when Arguello was able to hit receiver Matt Griffin on a 24-yard pass that would set the Leopards up to score three plays later, making it 20-13.

It didn’t take long for the Leopards to tie the game up, when linebacker Jimmy Morin was able to pick the ball off and run 35 yards for the touchdown, knotting the game up at 20. The Leopards’ defense would respond in a major way again when it was able to hold off Pomona and get the ball back for the offense. The Leopards would then march down field and set up kicker Alex Miller with the potential game, winning kick. Unfortunately, the Sagehens would block the kick and force the game into overtime.

Pomona would get the ball first in overtime, and the Leopards wouldn’t allow them to do anything with it, holding them scoreless.

The Leopards came close to winning the game but was unable to finish the game off when Miller missed yet another kick.

Both teams were left scoreless in the second overtime period, which led to a great conclusion.

In the third overtime, the Sagehens were faced with a fourth down and 17 yards to go when quarterback Jacob Caron connected with Robert McNitt for a 28-yard gain to the Leopards’ four-yard line. Three plays later, Luke Sweeney’s two-yard touchdown run, along with a Jacob Caron pass to Chris Thomas for the two-point conversion, gave the Hens a 28-20 advantage.

On La Verne’s last chance to tie the game up again, Arguello hit Griffin yet again and was taken down on the eight-yard line. Two plays later, Arguello was able to connect with Allen Daniels in the end zone. La Verne was forced to go for two to tie up the game.

Arguello tried to get the ball to Andrew Rubel but the pass fell short. And like that the game was over.

Arguello threw for 320 yards against the Hens on 31-of-49 passing, collecting two touchdowns with one interception.

The Leopards will finish their season on the road at 1 p.m. on Saturday in Whittier. 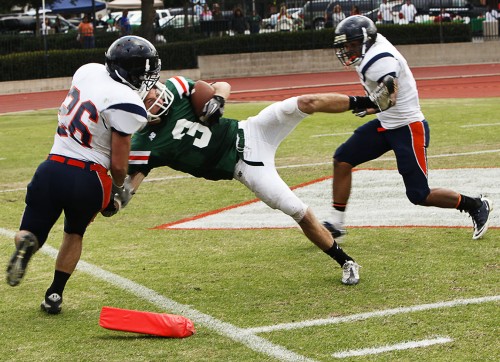 La Verne’s junior wide receiver Matt Griffin makes a catch in the end zone in triple overtime on Saturday. Although Griffin appears to be inbounds with possession of the football, officials ruled that he was out of bounds during the catch. After a 15-yard unsportsmanlike conduct penalty for arguing with the officials, the team later scored but failed at a two-point conversion, which would have sent the game into quadruple overtime. The Leopards will conclude their season on Saturday against Whittier. / photo by Garrett Gutierrez