By Candice Nuñez, Nicole Ambrose on February 22, 2013 in LV Life 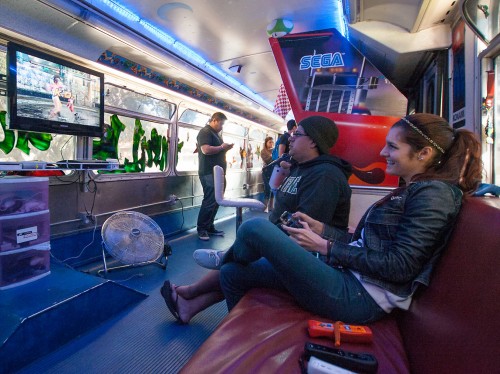 Senior Victoria Moreno and Edgar Gomez, junior Spanish major, battle it out in “Street Fighter” on Playstation 3 in the “Thrills on Wheels” video game truck Feb. 13. Thrills on Wheels is a gamer’s dream filled with arcade games and equipped with a couch, a Wii U, Playstation 3 and Xbox. The bus was parked at Sneaky Park and was open to any student who wanted to come in. /photo by Nicole Ambrose

The Campus Activities Board decided that the students on campus could use more video games in their lives.

That’s why Kayla Hockman, sophomore public affairs major and CAB Films Chair, came up with the idea to have a video game truck come to campus last week.

The event was also meant to help promote her “Wreck It Ralph” film showing event later that same day.

“I thought it would be really cool to have something different, and when I was googling … I saw the video game bus, and I thought that was kind of a cool idea,” Hockman said.

Hockman, with the other CAB members, designed a photo booth made of cardboard to simulate the actual arcade game “Fix It Feel It Jr.” in the movie “Wreck It Ralph.”

“We worked really hard on that photo booth,” Hockman said.

“It literally took us six hours to make, and I thought it would be really exciting and different to use for this event relating to the movie.”

When students made their way from the photo booth in Sneaky Park, it was hard to miss the large bus painted with pictures of classic Nintendo characters like Mario, Bowser and a variety of other classic arcade game characters parked alongside the street.

The truck was filled with multiplayer games so students could have engage in friendly competition.

“When I walked up I honestly thought it was a food truck, but I was surprised to see that it was a bus full of video games,” said Allen Daniels, senior public administration major.

The inside of the bus had a classic video arcade atmosphere with pictures of “Pac-man,” and “Zelda.”

The truck was covered with posters of Capcom and Neo-Geo.

There were dozens of free games for students to play like “Frogger,” “Terminator,” “Lethal Enforcers,” “Galaga” and “Crisis Zone.”

Not only did the video game bus have classic games, but it also had newer consoles to play like Playstation and Xbox games like “FIFA” and “Mortal Combat.”

“Terminator 2” is a video game based on the 1991 film “Terminator 2: Judgement Day” starring Arnold Schwarzeneg­ger.

Wagner was only there for 15 minutes but managed to play a couple of games and ran into a few friends.

“It seemed like everyone was having fun and socializing with other people,” Wagner said.

Many students thought the video game bus event was a unique idea and had fun stopping by and playing in between classes.

“I saw the giant bus with pretty cool designs on it and realized that it was a gaming truck and since I love playing with video games I wanted to check it out,” said Gloria Escalante, senior athletic training major.

“It was definitely a good event,” Wagner said.

“The bus looked really cool and my friend said there was a lot of games on it so it seemed interesting,” Natalie Hernandez, sophomore psychology major, said.

“I would definitely come to an event like this again,” Hernandez said.