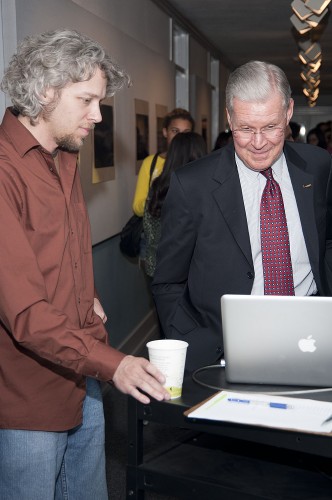 University of La Verne President Steve Morgan and Photography Department Manager Kevin Bowman were among those in attendance at the reception for “Remnants,” on Feb. 8 in the Irene Carlson Gallery. Featured photographer Beau Comeaux, who is based in New York, participated in the virtual reception that allowed guests to to chat with Comeaux, via webcam connection to his office at Sage College in Albany, N.Y. / photo by David Bess

The Carlson Gallery’s opening night of the photography exhibit called “Remnants” by Beau Comeaux served as a gathering for students and faculty to appreciate and interpret photography in an out-of-the-class setting.

The exhibit is a 23-image show of wastelands and ruined civilizations that have been vividly exposed and edited to evoke mystery and wonder in all of its viewers.

“It looks like the aftermath of a neutron bomb,” junior sociology major, Maria Zuleta, said.

Guests were able to communicate with Comeaux by video chat. The computer was placed on a cart so that it could move around allowing him to see the gallery from his office in NY.

Of all the photos that line the walls on the gallery, one particular image, titled Playhouse, seemed to be the most popular throughout the reception.

The image captured the debris of what may have appeared to be an old house. The trees and foliage had overgrown and taken over what remained of the brick house. Scattered throughout the grass were children’s toys and a child’s play table.

Comeaux described himself as a surveyor of long extinct civilizations.

“With child-like curiosity I examine the world with the determination of an explorer and the eye of a would-be-scientist,” Comeaux said.

That child-like curiosity evoked a sense of wonder in viewers.

“When I look at the pictures I get the feeling that someone might be hiding in the rummage,” sophomore biology major, Avneet Nijjar, said.

The artist described his work as an intersection between science and art.

“I feel like there is an element of surprise in the photos. Seeing inanimate objects in nature just makes me wonder,” junior psychology major Monica Delgado said.

Al Clark and his honors colloquium class were in attendance and spent a few minutes at each photo sharing their thoughts and discussing the meaning of the photos.

Other students that were in attendance were overheard saying that the use of colors and tones in the images reminded them of scenes from scary movies.

The images appear dark at first glance, but with a closer look the use of vivid colors make the seemingly dark images bright. The use of vivid oranges, greens and blues are used in many of his photos.

Comeaux discussed his techniques for capturing the colors and spacing in his work.

He first photographs the scenes in multiple segments. After this, he stitches them together on the computer and edits the scene until the photo achieves his desired effect.

The sharpness of the photos and the use of contrasting colors fooled viewers into thinking the photos were actually paintings.

Comeaux was described as being fun and interesting by Gary Colby, professor of photography.

His personality is clearly on display in his fun and interesting exhibit.

The exhibit will be on display in the Carlson Gallery until March 25.

Sara Montgomery can be reached at sara.montgomery@laverne.edu.