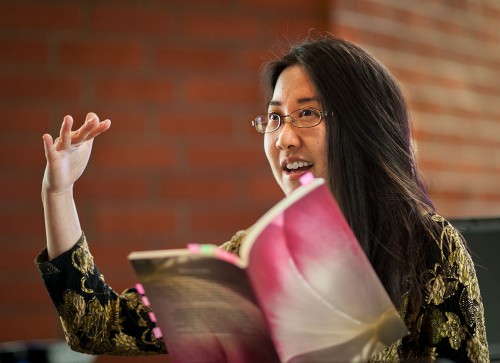 Karen An-Hwei Lee shares poetry from her book, “Phyla of Joy,” at a poetry ready on April 25 in the  Chapel. The poems look at the joy of simple things with a focus on prayers, dream-like worlds and the intimate beauty of small moments. Lee described writing as an act requiring discipline while being therapeutic at the same time. Lee lives and teaches in Southern California. / photo by Chelsea Knight

With rays of blue and yellow light streaming in to set a soothing backdrop, poet Karen An- Hwei Lee performed a reading and short presentation to an intimate group in the University Chapel last Thursday.

Lee read from her most recent book, titled “Phyla of Joy,” and shared a Prezi online presentation that she uses to teach one of her classes.

She briefly explained the meaning or inspiration behind each poem before reading them in her quiet, yet passionate voice that moved with twinkling, fairy-like inflections. While each poem was unique, the constant themes of nature and organic bodies continually appeared.

“Here we are so separated from nature and it is dazzling when Lee finds ways to bridge nature to us,” said Irwin. “She is able to show us what we do not notice or see.”

Lee connected to nature with childhood memories in her poem about flying ants that had the audience laughing and in another poem she compared an airplane pilot to a wasp. She explained that nature is a force that naturally appears in her work because she is so interested in it.

Lee’s work also dealt with serious and historical events such as the experiences of the Asian women who lived on Angel Island in San Francisco for years in near imprisonment while awaiting entry into the United States. Lee told the audience that only the works of male poets from Angel Island were made famous and consequently only the male experience was heard because the 1940 fire destroyed the women’s poetry that was written on the walls. In “Petty Skills like the Carving of Insects,”

Lee wrote from the perspective of an Asian woman trapped on the island because she wanted to give them a voice.

This poem was a favorite among the audience.

“I found it really interesting because it touched on history and it paid homage to the people on the island.” said Monique Osorio, a senior political science major.

Much of Lee’s work also focused on female relationships and bonds between mothers, sisters and daughters. Feminist themes and focusing on strong women such as the first Asian-American female pilot were also apparent in Lee’s poetry.

“As a woman writer it is so important to get our voices out there,” said Lee. “We still continue to develop and grow and the truth is; these voices are still competing. I want to offer a different perspective.”

Lee then shared a multi-media presentation that she used in her class to teach the audience about different Asian forms of poetry that are not well-known. She also explained how she combines her experience and love of creative and academic writing and gave advice for students struggling to do the same.

“Understand writing as an art and a practice,” Lee said. “Read a lot of different genres and make writing a discipline. Create a mental and physical space for writing.”

Irwin, who helped to plan this event, said she was happy to bring in a local poet with such a great track record.

“She (Lee) takes poetry so seriously and the work she puts into it is just amazing,” Irwin said. “The poetry infuses her. She lives for these languages and the lexicon and knowledge she has is amazing.”