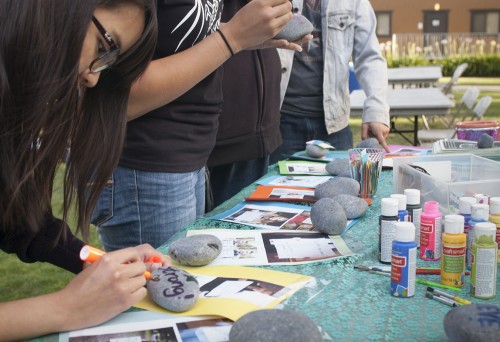 The term “rape culture” is being used more and more frequently in social media, public conversation and even the mainstream news media.

According to a report by the Marshall University Women’s Center, “Rape Culture is an environment in which rape is prevalent and in which sexual violence against women is normalized and excused in the media and popular culture.

“Rape culture is perpetuated through the use of misogynistic language, the objectification of women’s bodies, and the glamorization of sexual violence, thereby creating a society that disregards women’s rights and safety,” according to the report.

The phenomenon is not new. “(But) we now have language to discuss it,” said Jennifer Pozner, founder and executive director for Women In Media and News.

Some components of rape culture include blaming victims for their sexual assault, trivializing sexual assault, focusing on an assault victim’s dress, or sexual history, according to the Marshall report.

Gratuitous sexual violence in television and movies is another way rape culture is normalized as part of pop culture, Pozner said.

Rape culture in the media

On Aug. 11, 2011, in Steubenville, Ohio, a 16-year-old girl, incapacitated by alcohol, was gang raped by two high school football players who then shared photos of the assault on their social networking sites and with their friends.

The mainstream news media immediately began to blame the victim, saying it was her fault for choosing to get so intoxicated. When the verdict came out, both perpetrators were charged as delinquents and given the minimum sentences, one received one year and the other two years.

Many media outlets reacted to the verdict with sympathy for the rapists, instead of the victim.

Covering the trial for the CNN program, State of the Union, on March 17, 2013, reporter Poppy Harlow said that, “It was incredibly difficult, even for an outsider like me, to watch what happened as these two young men that had such promising futures, star football players, very good students, literally watched as they believed their lives fell apart.”

Following CNN’s coverage, outrage swirled online on Twitter, Tumblr and the publication Slate, among others and started a conversation about the way victims of sexual assault are treated by the media. An online petition from a viewer calling for CNN to apologize for its “disgusting coverage of the Steubenville rapists” reached far beyond its goal of 205,000 with more than 290,000 signatures. The petition was created in March 2013, but it is still gaining more signatures every day.

In the comments section of the change.org petition, signers shared their personal stories and reasons for supporting the cause.

Among the comments, petition signers wrote:

“Those boys had a choice. They chose to rape an incapacitated girl. She had no choice.”

“I am signing because I am fed up with being invisible.”

“Through your editorial choices, you have perpetuated and strengthened the culture of rape. You owe that young woman—and all women—not only a sincere apology, but a change in your policies,” petition signers said.

However, CNN never issued an apology. Instead, The Wrap, an entertainment and media business magazine, revealed that Harlow was outraged by the criticism and the idea that people thought she supported the rapists.

“When you have media that collude to tell victims that their perpetrators matter, but they do not, it becomes much harder for victims to believe that they will be taken seriously if they come forward, and much harder for them to think that maybe their life could get back to normal,” Pozner said. “They know that if they bring charges, they will be the ones dragged through the mud in the press, and not necessarily their perpetrators.”

Pozner has focused her career on media monitoring and analysis.

“The news treats victims like crap,” said Alyssa, a 19-year-old rape survivor. “I was scared to come out because I’ve seen what’s happened to girls like me. They get death threats, rape threats. It’s like they have to face even more bad stuff because they were brave and they spoke up. That’s not okay,”

“From movies to dramas—even shows that say that they intend to be supportive of victims and counter to rape culture, such as ‘Law and Order: Special Victims Unit,’ which on its face is supposed to be about exposing rape culture, but in practice, regularly reaffirms it through cinematography, through dialogue, through narrative arc, through visual and costume choices,” Pozner said.

Rape is about power

“Rape and sexual violence is not about lust or sex; it is about power and control and anger.” said Loretta Rahmani, dean of student affairs and Title IX coordinator at La Verne.

According to the handbook on sexual assault prevention put out by the Office of Student Affairs, “Offenders often choose people whom they perceive as most vulnerable to attack or over whom they believe they can assert power.”

A study conducted in 2009 by Rebecca Stotzer, a professor at the University of Hawaii and expert in Lesbian, Gay, Bisexual and Transgender hate crimes, called “Violence against transgender people: A review of United States data,’ found: “Approximately 50 percent of transgender people experience sexual violence at some point in their lifetime.”

Dick Sobsey, professor emeritus of educational psychology at the University of Alberta, researched the rate of sexual violence against disabled people and found in his 1994 study “Violence and Abuse in the Lives of People With Disabilities: The End of Silence Acceptance?” that “almost 80 percent of people with disabilities are sexually assaulted on more than one occasion and 50 percent of those experienced more than 10 victimizations.”

According to a recent study, “Normalizing Sexual Violence” by Marquette University sociologist Heather Hlavka: “Girls understand their position in a patriarchal sexual system and therefore might assume authority figures of all types will blame them or perceive them as bad girls who ‘let it happen.’”

For her study, Hlavka interviewed 100 young women and she concluded: “Some girls belittled others’ experiences, holding them responsible for their victimizations.” Hlavka cited the lack of safe and supportive space for young women as a key factor for why they are afraid to report and to support each other and called for more gender-equitable sex education in schools.

Advocates, however, believe rape culture can be overcome through education.

“We teach anti-bullying to kindergarten and elementary school students which is an age appropriate way to talk about power and control, which is at the root of sexual assault,” said Sophia Lopez, prevention services coordinator for Project Sister.

“Some of the biggest ways of combating rape culture, that we take part in, is breaking the silence around rape,” Lopez said. “There’s also talking about what is rape culture, how to recognize it and how to not actively participate in it, by not telling rape jokes, by not blaming the survivor.”

“I think we need to start very young,” Pozner said. “We’ve now lived through more than a decade of poisonous attacks on and zeroing out of sex education under the Bush administration. There are millions and millions of kids who’ve been taught that if a girl is not virgin before she gets married, she’s like a dirty toothbrush that has been passed around in the mouths of dozens of people. All these ideas about sexuality itself make the idea of enthusiastic consent invisible and make girls seem dirty and worthless if they want to have sex and consent.”

Lopez also explained the importance of media literacy, and being able to distance yourself from problematic sexist themes in music or television, while still enjoying it on a surface level.

“People need to realize that just because you are hearing it and seeing it, you don’t have to agree with it,” she said.

“We need to be calling out and challenging corporate and sometimes independent media by exposing and demanding accountability when they publish broadcast stories that let rapists and perpetrators off the hook and blame victims for the assaults against them. We need to demand specific standards about what is and isn’t okay or acceptable and fair coverage of sexual assault for news outlets.” Pozner said.

Take Back the Night: Standing for victims
The Courage to Heal: Life after sexual assault

One Response to Rape Culture: The media’s role in normalizing assault