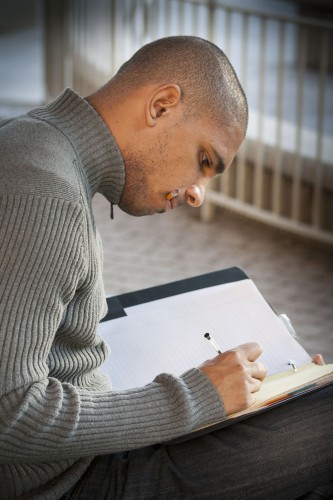 Other than his life on the track, Mike Sacoto, senior movement and sports science major, enjoys drawing people and things around him. Sacoto hopes to attend graduate school at La Verne. He also aspires to continue as a track and field coach. / photo by Jessica Harsen

Six months after graduating with his bachelor’s in movement and sports science, 25-year-old Michael Sacoto continues to have a large presence on campus both on and off the track.

Sacoto has come a long way from his hometown of Patterson, N.J. Burdened with family struggles, inadequate education and tragedy early in his life, Sacoto has had his fair share of hardships; however, he has not let any of them get in the way of his success.

When Sacoto was 14, his mother was diagnosed with Amyotrophic Lateral Sclerosis, which deteriorates the body’s functions and muscles.

During his junior year of high school in Patterson, Sacoto and his family moved to California and he began attending Santa Monica Catholic High School.

“I had to go through this all during my junior year at a new high school, and it was hard, being new and not fitting into any of the cliques yet,” Sacoto said, “But the one thing I really turned to was track and field.”

“I was always fast in New Jersey; I would always race people out of nowhere and I’d run after the bus if I was late for it, and I’d catch it, so I joined the team. It took my mind off of my mother’s death and turns out I was really good at it.”

Sacoto helped to bring his track team their first championship victory in the school’s history and continued on to attend Santa Monica College and run for their team.

He also began training with the Santa Monica Track Club, a group that recently sent two of its runners to compete at the London Olympics.

Sacoto was then recruited by head track and field coach Pat Widolff to run for La Verne.

When Sacoto transferred he experienced huge improvements both athletically and academically, breaking the school record for the 800-meter and excelling in his classes to graduate in only two years.

Graduation became one of the biggest accomplishments for this young man who went to an elementary school that was so bad, he did not even know that high school existed.

He is now awaiting his acceptance into the La Verne graduate program for organizational leadership.

Looking into the future, Sacoto has many goals. He is now applying for dual-citizenship in Ecuador with the hopes of making it onto the Ecuador Olympic team to compete in Rio in 2016.

As an ideal career, Sacoto can’t imagine himself doing anything other than coaching a track team, yet he always has a back-up plan to join the military.

He owes most of his success to the support of his sister, brother-in-law and aunt who are the closest family he has, as well as to the track and cross-country teams.

Sacoto continues to be enormously dedicated to the track team whether it is holding after-meet barbecues, creating a team Facebook page or helping train the middle distance runners.

Currently Sacoto is training with sophomore MSS major Christian Valdivia for the 800-meter.

“One day Michael came up to me and said, ‘Come out here and run with me,’ and we just hit it off and started training,” Valdivia said. “He’s always so positive and encouraging. He really inspires me and I want to be like him someday; I want to be that fast.”

Sacoto continues to aid the team and Widolff any way he can, whether it is sending out recruitment letters or serving as a confidante and problem solver.

“Michael has really brought a lot of team building skills to our program and if anybody ever had a problem, they would always come to him,” Widolff said. “He was someone I could really talk to on a mature level. I’ll only take credit for getting him here to La Verne, but he’s the one that worked to make everything happen.”

Sacoto’s personality, diligence and dedication have largely affected his teammates and friends.

“He’s my hero,” Miguel Martinez, junior MSS major and Sacoto’s roommate, said. “I was one of the football guys that transferred over to track and the friendship that I built with Mike is the reason that I stayed. I had the best time of my life doing something I’d never done before and he and the other guys made it a really memorable experience that I’ll never let go.”

Sacoto is optimistic about his future and is hopeful that he can do good in sharing his story.

“It’s been a heck of a ride, but it’s made me stronger and I’m happy for it,” Sacoto said. “I really hope people will be able to get inspired by my story. I know I’m not the only one that comes here all alone, so I want people like me to know that when they’re starting out it might seem too hard, all they have to do is realize if they work hard there is a way and they can succeed.”

An abstract outlook on landscapes
Commentary: Respect the campus. RESPECT IT.