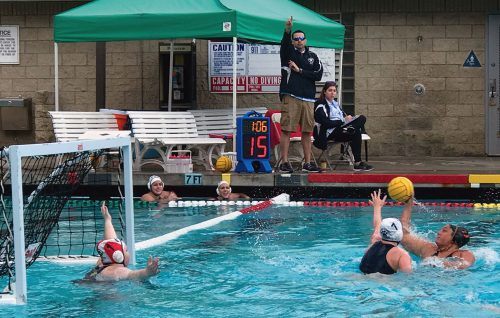 The women’s water polo team co-hosted the 2020 Convergence Tournament last weekend, where they gathered momentum throughout to end with a 3-1 record.

The Leopards now have an overall record of 10-5 and a 2-0 record in conference.

The tournament, which has been going on for over 20 years, is partnered with Pomona-Pitzer and Claremont-Mudd-Scripps, attracted 18 teams including local conference rivals to Division I and II opponents from all over the country.

On Friday, the Leopards ended their six-game winning streak to Sonoma State, losing 16-8.

Junior attacker Jassmine Kezman scored three goals but it was not enough to stop a well-oiled Seawolves team.

Later that day the Leopards battled to an 11-9 win against east coast team St. Francis.

Freshman guard Nanea Mattson lead the way for the Leopards with four goals.

Mattson was happy with her personal performance as well as her team’s, but acknowledges that things need to get better as the team continues this season.

“There’s a lot of things we need to improve on but mainly communicating with each other and our overall conditioning,” Mattson said.

On Saturday, the Leopards won their second overtime game of the season beating Villanova, 10-9. Kezman once again lead scoring for the Leopards with four goals, but it was senior goalkeeper Shelby Garcia who stole the plaudits, making 15 saves in the tightly fought contest.

After the tournament, Garcia reflected on the proceedings with an eye on upcoming conference games.

“There are a lot of positives to take out of this tournament, but there’s a lot to practice going into SCIAC,” Garcia said.

The Leopards’ last game of the weekend was a 17-4 thrashing over Penn State Behrend.

The Leopards dominated the one-sided affair with a well-executed game plan where a total of 13 Leopards got in on scoring.

Sophomore attacker Sumi Rudisky was one of those scorers and was happy with the pace passing in the win.

“I think when we keep up our intensity and work hard, we see other teams struggle to keep up with us,” Rudisky said.

Reflecting on the tournament, head coach Pat Beemer was pleased with how his team rebounded after a disappointing loss in their first game.

He was happy with his team’s competitive desire to win and positive attitude over the weekend.

“Mentality and attitude is infectious, if you get Debbie Downers on the squad everybody will spiral, so the opposite of that is if we are encouraging, supporting and competitive then we play and win and are having fun,” Beemer said.

On Wednesday, the Leopards went up against conference rival Chapman, demolishing the Panthers 17-4, with nine different Leopards scoring this time. Leopard centers, freshman Nancy Trinh and senior Illene Guerrero, each scored a hat trick and lead the Leopards in scoring. Kezman also had a productive game, notching four assists to go along with her three steals and pair of goals.

La Verne outscored Chapman in the first half 7-2, before slamming the door on the Panthers 10-2 in the final half, winning the game 17-4.

With next week’s game against George Washington canceled due to the coronavirus, the women’s water polo team will play on the road against Claremont-Mudd-Scripps on March 18 at the Axelrod Pool.

Charles Green can be reached at charles.green@laverne.edu.