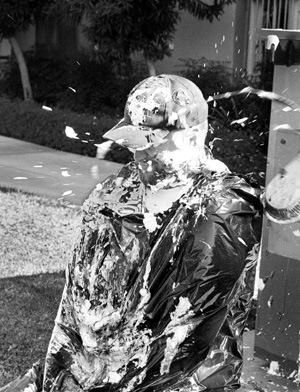 At the Commuter Carnival celebration, football coach Mark Potocki takes one for the team as one of his players, Mark Vasquez, creams him with a pie. When asked what year Vasquez was, his coach jokingly replied that he was only a junior and would pay for this next year. / photo by Kati Kelly

In honor of all the commuters on campus, the University of La Verne presented games, food, and prizes on Tuesday.

The Commuter Carnival, put on by the Commuter Advisory Board (CAB) and the Commuter Activities Programmers (CAP), was held especially for the commuter students.

Shellie Etheridge, president of CAP, said, “The purpose of this event was to reach out to commuters and educate them on what ULV has to offer. We want commuter students to become more involved on campus. They often feel left out. CAP programs events, such as the Commuter Carnival, to keep the students involved.”

Lead representative of CAB Kaylyn Ince said, “Our job is a little different than the job of CAP. We work to confront the issues directly facing commuter students. Parking is an ongoing issue we often have to deal with.”

The ULV quad was filled with booths set up by various clubs and organizations offered on campus. Davenport catered the event where all students were able to feast on hamburgers, hot dogs, pasta and potato salad.

ASF sponsored a caricature booth where students were able to get free drawings of themselves.

Darlene Dona Douthit, a Quick Draw Caricatures artist, said, “This is great. It’s so wonderful to see students get together like this.” 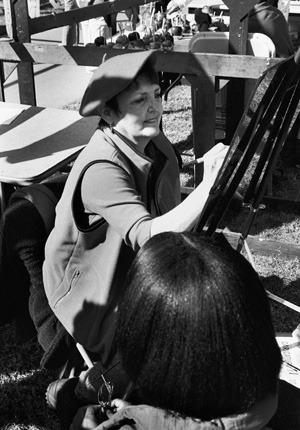 Darlene Dona Douthit from Quick Draw Caricatures turned many ULV students into characters for free at the Commuter Carnival celebration on Tuesday. / photo by Kati Kelly

One of the organizations present was Sigma Kappa. The purpose of its lollipop game was to increase awareness of their Alzheimer’s disease philanthropy. Phi Delta Theta, another Greek organization, had a booth to win candy. The International Student Organization had Japanese and Chinese body painting, the Latino Student Forum was there, and Chi Delta Omicron had an arm-wrestling booth.

CAB and CAP gave students the opportunity to play three-legged twister to win a parking space in front of Miller Hall for three days.

The Dance Club was also out there with its Dance Club Shake Down. The winner won a CD of their choice.

Sara Kirk, president of the Dance Club, said, “We wanted our booth to promote the dance club and get more people to join. We have three classes offered that meet throughout the week. We hope that our jazz class can get together to form a dance team next year. So we need everyone’s participation to make it work.”

KULV broadcasted outside and gave away free CDs. La Vernacula gave away free nachos and the Society of Physical and Life Science organization held a raffle to win various prizes.

Freshman Andi Nunez said, “Even though I’m a resident student, it was great to meet some of the commuter students that I usually don’t see.”