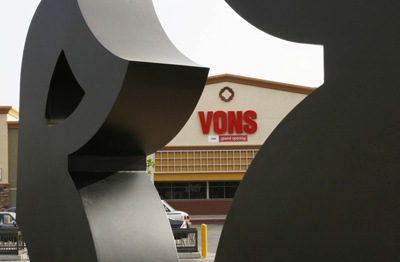 A public art piece, “Angle of Repose” was created by Steven Elicker and commissioned for the new shopping center, the Commons at La Verne. The grand opening for the Commons was held April 18, with a preview party on April 17. / photo by Seanette Garcia

One of La Verne’s biggest shopping boulevards is about to get even bigger, with the construction of more than 100,000 square feet of new retail space on Foothill Boulevard, east of Wheeler Avenue.

The Commons at La Verne, which has been in negotiations since 2004, opened on April 18, complete with a Vons, Ross, Famous Footwear, Red Persimmon, Jamba Juice and Supercuts.

Nearly 52,000 square feet of the center will be devoted to Vons, which will be a premium store that contains a Starbucks, bank, deli, pharmacy and a 12-pump Vons gas station.

“I think that this new center will have a positive effect on La Verne because it will attract more people and more revenue, and hopefully there will be a pick-up in business in the area,” Eric Scherer, principal planner for the Commons said.

Scherer said he hopes the revenue that the center brings in will translate to more tax dollars for the city so that La Verne residents can be provided with more goods and services.

Officials and residents are eager about the new center and excited to see the space fill up with tenants that have the potential to last and be successful.

The site was originally home to K-Mart, which shut down in 2002 when it went bankrupt, and their lease was sold to Vons.

Despite being purchased, the site remained vacant, except for Extreme Value, a discount store which saw little success.

In September 2004, the site was purchased by Combined Properties, Inc., and applications were filed to remodel the center.

“We’re hoping to see better business with the new tenants because when one store closes, the other stores lose business as well,” Scherer said.

Some of the surrounding shops are feeling nervous about the competition that will come from the trendy new stores.

“The center looks nice and it will mean more jobs, but it will also mean more competition,” Anita Lerma, Jamba Juice supervisor, said. “There’s always competition no matter who is out there.”

Others seem to feel that their dependability and consistency will prevent any loss in business, and do not think that the center will negatively affect the city.

“Most people that come here have been coming here for years,” Ernestine Coronal, pharmacy technician for CVS Pharmacy said. “They like the service, they like the staff and that’s why they keep coming back.”

In fact, some stores seemed excited about the center and believe that attracting more young people will be a positive asset to the community.

“I’m excited about the new center. I can’t wait to go check it out, and I think it will be a good thing because it will draw more young people in and people from other cities as well,” Cynthia Asmar, Radio Shack sales associate, said.

Despite concerns about competition and losing business, students of ULV are excited about The Commons and think it will be a top choice when it comes to their shopping choices from now on.

“I think the center will benefit the students because there is not a whole lot around and it will provide them with newer, nicer stores,” Whitney Brown, junior psychology major, said.

Foothill Boulevard is the major retail corridor of the city, and adding another state-of-the-art shopping center will only give students more incentive to shop in La Verne.

“There is not a lot of vacant land on Foothill, so it is important to keep the retail fresh and competitive,” Scherer said. “We hope that this will become one of the most successful centers on Foothill.”

On the Calendar
Commuter Day is a Billboard Hit