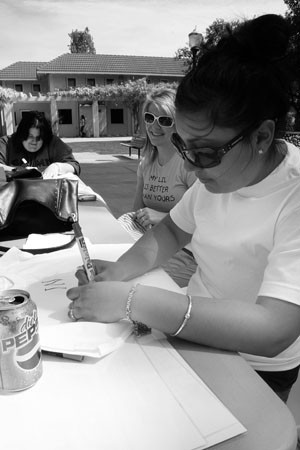 What started in Cape Cod, Mass., in 1990 has found its way to La Verne. The Clothesline Project was created to provide a medium for communicating the experiences of women affected by violence and to raise awareness in the community. Junior Vanessa Avilez and other Iota Delta members hung shirts in Sneaky Park March 21-23 to help the Rally for Women’s Lives. / photo by Seanette Garcia

Powerful messages on different colored shirts hung on a clothesline in Sneaky Park, in honor of the annual Clothesline Project put on by Iota Delta sorority members March 21 to March 23.

Iota Delta had a unique way of promoting the project.

On March 19 and 20 at least 15 sorority women wore one of the different colored shirts and had fake bruises and scars on their faces.

On the front of the shirt said “The Clothesline Project” and on the back were the words “Ask Me.”

This act was meant to help raise awareness and give a face to those who are suffering.

Each different colored shirt represented a different type of violence that occurs towards women.

A white shirt represented women who have died as a result of violence.

Red and orange shirts represented women who have been raped or sexually assaulted.

Green and blue shirts represented women who have been victims of incest.

Purple shirts represented women who have been attacked because of their sexuality.

Black shirts represent women who have been attacked for political reasons.

“The bruises and scars that we put on each one of our sisters wearing the shirts really impacted the faculty, staff and students,” Elizabeth Canales, senior and president of Iota Delta said.

“Both faculty and students self-disclosed instances in which they were victims of violence themselves and thanked us for our willingness to be a victim for a day,” Canales said.

Each of the sorority members who dressed up on March 19 and 20 said the reactions of those who saw them varied and it made them have some realizations of their own.

“Some people would ask me about it and some people wouldn’t,” Lorraine Rodriguez, a freshman criminology major said. “It made me realize if this was real how many would hear my story.”

Rodriguez said the experience made her realize the isolation that some of the victims experience and that it has motivated her to help.

During the two days, Rodriguez wore a purple shirt and had her face decorated to look like she had been beaten.

Both sorority members and students who participated said that it is important to bring awareness to others and for people to speak out.

“I’ve learned that in some aspect everyone has been affected by tragedies such as these and that everyone has something to say about it,” Rodriguez said.

For some sorority members, the event impacted them in a personal way.

“I just wanted to support it because people close to me have experienced it,” Vanessa Avilez, junior and philanthropy chairwoman of Iota Delta, said.

Avilez wore a red shirt during the two days the Project was promoted.

During the Project, people had the opportunity to make shirts and sign a pledge that says to stop the violence against women.

“I’m here in support of Iota Delta and to be involved and show my support for the philanthropy they have going on,” Jon Fitzhugh, a senior accounting major, said.

Fitzhugh made a yellow shirt that said “You can’t touch this.”

“I think in regards to the human being, one of the worst things you can do is invade their privacy and personal space,” Fitzhugh said.

“(I want people) to know that it’s still something that we need to overcome,” Diaz said.

“It may not be as apparent as it was in the past, but it’s still very much a part of our society. It’s good for people to recognize that,” Diaz said.

Iota Delta members got to learn more about the violence that occurs against women on Thursday when Blanca Perez, a woman from Project Sister came to speak to the women.

Perez told the women about the different forms of sexual abuse and educated them on what to do if someone is experiencing abuse.

At the conclusion of the Project, a variety of different colored shirts, each with its own powerful messages, were left to be sent to the National Clothesline Project in Washington D.C.

Among those messages were, “Don’t be scared to talk about it” and “You are not alone.”