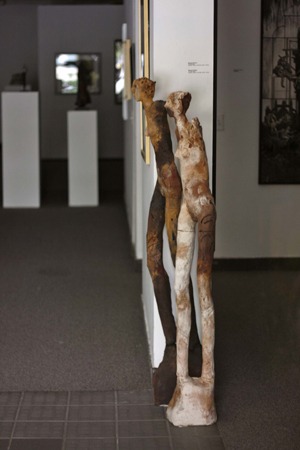 The Kellogg Gallery at Cal Poly Pomona hosted a reception for its annual “Ink and Clay” exhibition on April 12. Established in 1971, “Ink and Clay” is an exhibition of prints, drawings, ceramics and sculpture from 87 artists from throughout the western United States. / photo by Seannette Garcia

An array of detailed and masterful artists came together as Cal Poly Pomona’s Kellogg University Art Gallery presented its 34th annual Ink and Clay exhibit, which will be open until May 3.

Ink and Clay 34 is an annual competitive exhibit where artists display their work for jurors to determine the winners. This year’s exhibit features 87 artists and 120 pieces of artwork. Artists featured at the exhibit come from all around the United States.

While some of the artists live locally, others sent work in from various states, including Alaska. A complete list of all the artists in Ink and Clay 34 can be found at the gallery, however, a few on display include Steven Allen, Yeung Ha, Rebecca McCannell, Una Mjurka and Anthony Foo.

The jurors for the competition include Darrel Couturier from the Darrel Couturier Gallery and Mark Greenfield, Barnsdale Municipal Gallery Director. Director of the Kellogg University Art Gallery, Patrick Merrill, said that there are different jurors every year for the exhibit whom he selects.

The exhibit gives six purchase awards and six honorable mentions. Those who receive honorable mentions receive a cash prize. Merrill, who has been at the Kellogg Gallery for ten years, has his own shop in Covina.

“I’m a master printer,” Merrill said. “Generously there are about eight of us left in California.”

All of the artwork on display are original pieces of work. He expressed his great preference for original artwork as opposed to reproduced art.

“There are details that don’t show up in reproduction,” Merrill said.

Merrill does not really have a favorite work of art at the exhibit, but he really liked the prints done by Victoria Goro-Rapoport, which are on display at the front of the gallery.

Miguel Oliveras, a Cal Poly Pomona student majoring in fine arts, visited the gallery for the first time on April 10.

“So far it’s pretty good,” Oliveras said. “The prints are pretty good and even some of the ceramics.”

Stephanie Garcia, a nutrition major at Cal Poly, works at the gallery because she appreciates the art. She was excited to have the opportunity to attend the artist’s reception at the gallery on April 10.

“There were a lot of people,” Garcia said. “I was surprised. At least fifteen artists showed up, probably more.”

Garcia said the University spent approximately $10,000 on art at the reception.

The Ink and Clay 34 exhibit has been receiving financial support from Colonel Jim Jones. This year Colonel Jones gave the University $5,000 which was matched by the University President, Michael Ortiz, bringing the total to $10,000 for the exhibit awards.

The exhibit has enjoyed growing success and is looking toward a bright future. According to a statement made by Merrill, Colonel Jones has given the Kellogg University Art Gallery a permanent endowment of $300,000 for the exhibit.

For more information regarding the exhibit, visit Cal Poly Pomona’s Web site for a virtual gallery tour and catalog. The Kellogg University Art Gallery is open Tuesday through Friday 11 a.m. to 4 p.m. and Saturday noon to 4 p.m. Admission is free and parking cost $5.

Astronaut speaks about his experiences in space
Medications have their kinks