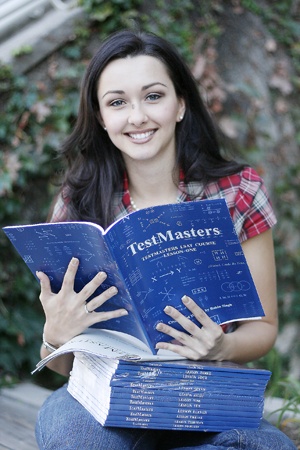 Lauren Moon, the reigning Miss La Verne takes leave from her job at the Los Angeles Superior Court to study for the Law School Admissions Test. Moon attends the Test Masters LSAT Preparation program in Claremont with hopes of being accepted into the USC Law School. / photo by Seanette Garcia

Lauren Moon has always made a name for herself, but in 2007 she exploded when she was crowned Miss La Verne, spoke at her graduation, graduated from the University of La Verne with a 3.94 GPA and was crowned a top 10 finalist in the Miss California Pageant.

The last time that we heard from Moon she had just received the crown of Miss La Verne and she said that she could not wait to work with the city council.

To her confusion, the role of Miss La Verne does not work with the city council, but instead works closely with the chamber of commerce.

Through the chamber’s extensive involvement in the city, she was able to attend luncheons, ribbon cutting ceremonies and grand opening celebrations.

“It is neat to see the different side of La Verne,” Moon said.

The Miss La Verne pageant is associated with the Miss America pageant, so as a result of being crowned Miss La Verne, Moon was asked to represent the city at the Miss California pageant over the summer, where she was ranked in the top 10.

She received help in this from local business owners who opened up their store fronts to allow her to practice.

Moon was offered sponsorships ranging from dentistry work to physical fitness training to assist her in her endeavors.

While attending the state’s pageant, Moon revealed that she met amazing women from all over the state, some of which she is still in contact with.

Moon said she did not have any expectations for the pageant.

But incredibly enough she was able to make it into the top ten, out of 49 contestants and also received two academic awards.

In total, Moon has received $3,800 in scholarship money and an invaluable amount of life experience.

While at the pageant, she received support through letters of encouragement from the La Verne community.

“ULV has been the foundation of learning about myself,” Moon said.

Moon emphasized that through all of her years at ULV, she never experienced the close-knit community that La Verne has to offer until she was crowned Miss La Verne and began attending city-sponsored events.

She suggests visiting La Verne over the summer and seeing the terrific Fourth of July celebrations.

Moon also encourages embracing what the La Verne community has to offer instead of simply complaining about parking issues.

Moon said that becoming Miss La Verne has been a humbling experience because everyone has been so eager and willing to help her and she finally understands how important it is to help one another.

Moon also attributes her success in the pageant to the knowledge and experiences she acquired at the University of La Verne.

Moon said she gained a tremendous amount of experience through the Landis Leadership classes.

The Landis Leadership Scholars Program is a program for the top 1 percent of ULV students, where Moon was able to correlate theories into achievement.

“Lauren was one of the most outstanding Landis students we have had. She demonstrated leadership through her actions and her classmates were able to learn a lot from her experiences,” said Chip West, assistant dean of students.

Additionally, Moon shared that in the pageants there are four main categories: evening wear, physical fitness and health, talent and philanthropy.

The philanthropic section allowed the contestants to express any aspect of the community of which they felt passionate about.

Moon chose diversity youth education, of which she found great pleasure in through her participation in the housing department, diversity training and diversity programming.

“Being proud of who you are helps with understanding others,” Moon said.

Being an active participant within the ULV community is what helped Moon gain so much experience and recognition for being a beautiful and well-rounded woman.

“It is a part of who she is, she is continually trying to learn and be aware of diversity issues,” Eugene Shang, associate director of housing said.

Through all of her achievements she was able to speak at her own graduation, by expressing her story, but mainly offering words of encouragement to her peers.

“I enjoyed working with her because she is truly a special person,” Shang said.

Moon recognized her mother, her family, and the city of La Verne, as being the major contributors to her success and support system.

Cerina DeSouza can be reached at cdesouza@ulv.edu.