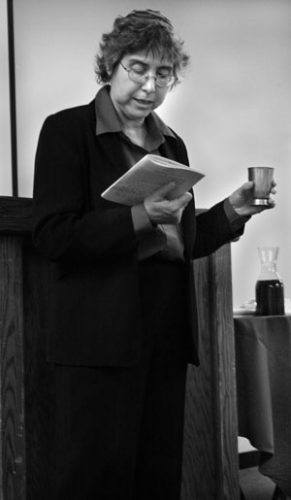 Rabbi Leslie Bergson performs the kiddush, the blessing over the first cup of wine, at the Model Passover Seder Wednesday in the President’s Dining Room. A seder is the highlight of Passover, the festival meal for the first night of the eight-day observance. The ritual recounts the story of the Jewish escape from slavery in Egypt. This year Passover begins on Monday. / photo by Seanette Garcia

The event focused on the ceremonial dinner that the Jewish community holds every year for Passover – a commemoration of the Jewish slaves’ exodus out of Egypt in ancient times.

ULV has hosted the Model Seder for more than 30 years.

“It is a way for us to acknowledge our (diverse) religious traditions,” Campus Minister Debbie Roberts said. “It is an opportunity for everyone to learn something about the Jewish faith.”

Around 40 students, faculty, and community members joined Rabbi Leslie Bergson for a traditional, yet shortened, version of the Seder in the President’s Dining Room.

Many students who attended spoke of their appreciation for the opportunity to be introduced to another culture’s customs.

“It is really cool to be able to experience something like this,” Alyse Beni, a sophomore psychology major, said.

“It definitely gives you a different perspective,” Beni said.

Rabbi Bergson, the Jewish Chaplain and Hillel Director at the Claremont Colleges, led those in attendance through the prayers and stories in the Haggadah, which is the traditional text used to relate the story of the Exodus.

“The Seder is about human longing and the striving for freedom,” Rabbi Bergson said, referring to the more than 3,000-year-old tale of the freeing of the Jewish slaves.

The need to commemorate those who struggle is very relevant, for there are still people in current times that are enslaved in some sense.

Rabbi Bergson read a passage from Holocaust survivor Elie Wiesel regarding Sudanese refugees, an appropriate example of all those who currently live under horrible conditions.

Although the subject matter would seem depressing, the Seder is all about reminding everyone that people can overcome and survive even the most terrible circumstances.

Several symbolic acts in the custom serve this specific purpose of commemoration.

For example, participants dip bitter herbs (or parsley) in salt water to symbolize the tears the slaves shed.

Another symbol of the Jew’s escape from slavery is matzo, a flat piece of bread that is similar to a cracker.

The matzo represents the bread that the Jew’s made right before they fled Egypt—they did not have enough time to let the bread rise, and this is why the matzo is unleavened.

Another more tasty snack is haroset, a mixture of chopped apples, nuts, and cinnamon. The food is meant to symbolize the mortar that the Jewish slaves used to build pyramids.

The Seder also commemorates the ten plagues that God set upon the Egyptians to threaten them to set the Jews free, including locusts, an abundance of frogs, and other equally unpleasant maladies.

The ceremony was marked intermittently with Rabbi Bergman playing a guitar and singing some of the prayers and stories in Hebrew.

Overall, the experience seemed to fulfill an important role for all who attended.

“It’s just a really great way for everyone to learn more about other cultures,” Robert Ruiz, a junior movement and sports science major, said.

Indeed, the need to accept religious diversity is extremely timely with regards to nations at war in the Middle East.

The holiday of Passover serves as a current reminder that there are still many people who do not have the various freedoms that Americans do.

During the Seder, Rabbi Bergman noted that the meal was open to all – regardless of religious affiliation – because yearning for freedom is something that affects everyone.

Passover begins on Monday, April 2nd this year. The holiday takes place every spring, alternating the date according to the Jewish calendar.

The celebration usually coincides with Easter; both holidays celebrate the onset of spring and a celebration of rebirth.

Erin Konrad can be reached at ekonrad@ulv.edu.