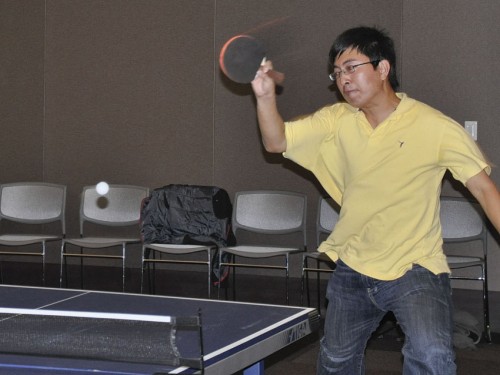 Jiaying Shen, a graduate student in the College of Business and Public Management, won the ping pong tournament in the Campus Center on Monday night. Proceeds from the event went to benefit the Latino Student Forum. / photo by Erin Maxwell

Professors impressed their students in a way that was quite out of the ordinary on Monday night by playing ping pong.

One was for students and the other was for staff and faculty in order to help LSF fundraiser for their upcoming events.

Those who were there for the first tournament featuring ULV faculty members were impressed by the intensity and competitiveness of their professors as well as how well they played ping-pong.

“It was so funny,” Julie Flores, a junior international business major, said. “Some of them were really into it. It was intense.”

“I didn’t expect the teachers to bring that level of skill,” said Daniel Perez, president of the Ping Pong Club and member of LSF.

Perez added that the most intense game he has seen was in that tournament.

Yousef Daneshbod, a mathematics professor, won the faculty tournament and left those who watched surprised by the way he played.

“Daneshbod is the king of pong,” Perez said.

The students tournament was just as competitive. Sixteen students participated in the tournament.

Jiaying Shen, an international student, won the tournament, which was played over a span of three hours.

The winners received gift cards to the Habit Burger Grill as a prize.

The price to enter for students was $2 and faculty paid $5.

The funds raised by the tournament were to help pay for Las Posadas, LSF’s biggest event.

The event is a Christmas celebration such as those celebrated in Latin American countries, more specifically in Mexico.

This is done through singing, food, pinatas and an explanation of what Christmas is really all about.

The players were randomly put into brackets and were eliminated from the competition for first place as they lost a game.

They played three games and the winner of two of those games continued playing in the tournament.

Those who lost were allowed to continue playing for second and third place. This means everyone got to play more than once.

For some of the players it was their first time playing ping pong.

Others just showed up to watch their friends play.

“A lot of our members and staff requested that we had a tournament. We thought it was a good idea,” Perez said.

“It gets the club promoted and at the same time we are having fun,” Araceli Sanchez, a member of the Ping Pong club, said.

Perez said they were also trying to promote friendly competition and get people to know each other and socialize at the event.

LSF had a fundraiser at the Habit Burger Grill Tuesday in order to continue collecting funds for the Las Posadas event.