By Stephanie Arellanes, Yessenia Romo on September 25, 2009 in Volleyball 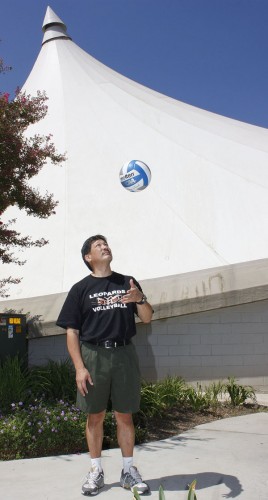 Marlon Sano the new women’s volleyball head coach, has coached collegiate volleyball for more than 30 years at six different institutions. His most recent positions were with the University of Nevada Las Vegas and Cal Poly of San Luis Obispo. / photo by Stephanie Arellanes

The University’s most celebrated athletic team has a new coach.

Marlon Sano, a former United States Olympic volleyball team assistant coach who most recently coached at Cal State Los Angeles, has taken over the reins of the women’s volleyball team and hopes to lead the squad to another winning season.

“This team is focused on taking care of things one match at a time,” Sano said. “Their goal is to win the national championship.”

Like his team, Sano said he hopes to see another championship banner displayed on the sports pavilion wall soon.

He said he wants his team to concentrate on the details before it can think about winning the championship, and also to develop the mentality that no single match is more important than any other.

Sano has coached for more than 30 years at different levels and schools, including the University of Nevada Las Vegas, Cal State Fullerton and Cal Poly San Luis Obispo.

Sano’s hiring is the biggest change to happen to the Leopard volleyball team during the off-season.

The announcement was made on June 25, about two months after former head coach Don Flora resigned.

After 11 years of leading the Leopards, Flora left to take an assistant coaching job at New Mexico State.

Sano was a speech communication major at Cal Poly San Luis Obispo and received his teaching credential there.

He and his wife Misty have two children, Markus and Madison.

Sano said that every coaching experience is different and that this team is unique in its personality.

“He brings a lot of different knowledge than we’ve been used to over the years.” Ashley Morgado, senior middle blocker, said. “Right now we are focusing on how we play as opposed to the scoreboard.”

The other players have similar opinions of their new coach.

The team is currently ranked No. 22, with an 8-7 overall record.

The team saw the loss of one of its key players, Brianna Gonzalez, who graduated last May.

She earned First Team All American and SCIAC Player of the Year honors.

This year’s team is composed of mostly the same team that played in last year’s championship game and a few talented freshman.

“There are differences,” junior setter Nicole Wandler said, “But it’s all different. Its a new team and a new year.”

“He’s changed everything from practice to how we eat, everything is different.” Morgado said.

The Leopards will not be lacking leadership with Gonzalez’s graduation.

The Leopards will host the Cal Lutheran Regals at 6 p.m. Saturday at Frantz Athletic Court.