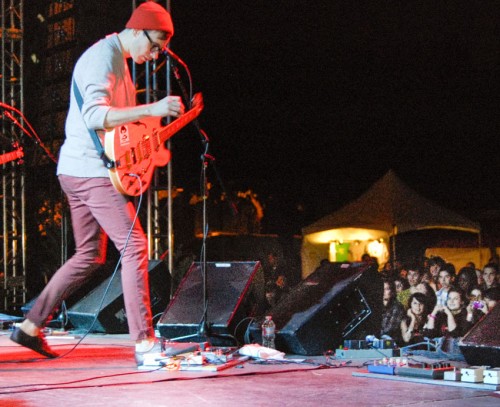 Hellogoodbye was one of several bands to take the stage at the Upland Music and Arts Festival on Friday. Frontman Forrest Kline introduced new songs from the band’s latest EP, “When We First Met.” The three-day festival featured a battle of the bands and other performances as well as various activities for the community to enjoy. Hellogoodbye performed 10 songs, ending their set with their biggest hit, “Here in Your Arms.” / photo by Christopher Guzman

The festival provided those who attended an enjoyable and educational experience, providing a family-friendly environment.

Certain booths centered their attention on extravagant foods, while others focused their talents on face paintings and intricate metal work.

The event kicked off Friday night, providing a diverse and artistic atmosphere to the community of Upland.

The most anticipated event of the night was a performance by Hellogoodbye, the acclaimed power pop band from Huntington Beach, who have taken the hearts of teenage fans for years.

LeoFM made it possible for up to 50 listeners to win tickets to see the acclaimed concert.

Though the festival itself was free of charge, certain attractions were ticketed at no more than $15.

To open up for Hellogoodbye was an array of Californian musicians, competing for the win in the Battle of the Bands. Raya Nova, Cold Comfort, Henheart, and La Verne natives The Motel Life, each had to prove themselves to a panel of judges, with Henheart ultimately taking the crown.

Hostess Robin Harris, with her energetic personality, helped introduce each act, preparing the crowd for Hellogoodbye.

After setting up for their performance, Hellogoodbye was received by a crowd of young, screaming fans.

They began their set with newly recorded song, “When We First Met.”

Though at first they experienced technical difficulties, after playing two songs all microphones were corrected, and the highly anticipated concert continued, without any further interruption.

The six-piece band, fronted by Forrest Kline, had its breakthrough debut in 2006 with “Zombies! Aliens! Vampires! Dinosaurs! And Beyond.”

Despite a number of lineup changes, they have continued to rein the hearts of powerpop enthusiasts, holding on to the synth-pop, indie-rock fanatics across the nation.

Hellogoodbye exceeded the audience’s expectations, playing 10 songs, including a number of crowd favorites.

“All Time Low,” “Baby, It’s Fact,” and “I Saw It On Your Keyboard,” were only a few of classic Hellogoodbye hits played that night.

Kline exuded a sarcastic attitude, though all in good humor, making fun of his bandmates in between songs.

The band’s chemistry proved that they truly were a good group of friends, as all were able to poke fun of each other and maintain a sense of professionalism, detailed in the intricacy of their music.

Even those with seating arrangements could not help but to stand for Hellogoodbye.

Despite playing at sold-out arenas and much larger festivals like the Van’s Warped Tour, they were able to take the time out of their fall tour to reach out to the residents of Upland and its surrounding cities.

Hellogoodbye’s fall tour consisted of a number of performances by them along with fellow performers Hanson, the unforgettable three brother band, who had a 1997 hit with “MmmBop.”

Hellogoodbye returned to California after about a month of touring the nation.

With stops in Georgia, Alabama and Tennessee, the band spent a majority of their time in the southern part of the United States.

They arrived in San Francisco only to perform a day later in Upland.

After much anticipation, they performed “Oh, it is Love,” with nearly all of the female-dominant crowd singing along to every word.

The tender love song tore into the hearts of all present, bringing couples closer together, and highlighting the days of hopeless romantics.

Once audiences began to fear a near end, Hellogoodbye played major hit, “Here in your Arms,” summing up the night for what made up a great performance.