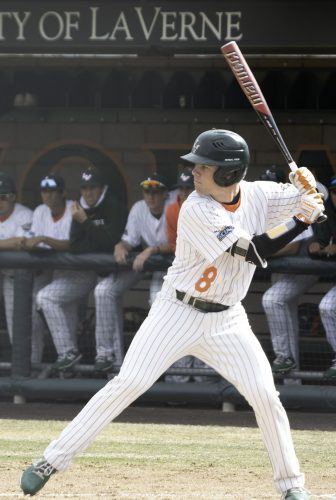 Leopards sophomore designated hitter Tanner Siffert bats against the Chapman Panthers. Though Siffert notched an RBI in each game of the series, the Leopards lost the series, 2-1. / photo by Marwan Hassan

The Leopards dropped the first game of a doubleheader against the Chapman Panthers by a score of 8-6 at Ben Hines Field last Saturday.

This was the Leopards’ second game of a three game set against Chapman.

La Verne lost the first game on Friday by a score of 4-2. Panthers junior starting pitcher Nick Garcia shut down the offense with six scoreless innings, striking out five.

The Leopards’ record on the season is now 5-6 and 1-2 in the Southern California Intercollegiate Athletic Conference.

On Saturday, the home team started off the scoring in the first when sophomore designated hitter Tanner Siffert brought home junior center fielder Patrick Keller with a solid single up the middle.

The Panthers responded quickly the next inning with a no-doubt home run to right by junior left fielder Henry Zeisler, tying the game.

An RBI ground out by sophomore shortstop Drew Littwin followed by a run-scoring single by senior designated hitter Kevin Gregorson gave Chapman a 3-1 lead in the top of the 3rd.

As the rain began to fall in the bottom half of the frame, sophomore first baseman John Bike cut the deficit down to one with an RBI triple.

“I finally got a good pitch to hit,” Bike said. “I was looking for that first one all series and I finally got one to hit.”

However, the offense was unable to bring Bike home from third and the Leopards still trailed 3-2.

Chapman responded with two runs in the fourth coming off of a pair of run-scoring singles by senior second baseman Aaron Wong and Littwin once more.

The right-hander was tagged for five runs, three earned, on seven hits. He threw 66 pitches.

After the game he discussed how he felt facing an undefeated team like Chapman.

“I was not really thinking about them being a number one team. Didn’t really try to think about that part too much,” Norman said. “Didn’t have a whole lot working but my change up was good, lots of pitches working down in the zone.”

Senior right-hander Devon Burhans was brought on in relief of Norman.

Though he surrendered an early run on an RBI single to junior right fielder Kyle Joye in the fifth, Burhans settled down and kept Chapman off the board for the next four innings.

“I was just trying to keep our team in the game. Trying to be as competitive as possible, hoping our offense could get going,” Burhans said.

The offense soon got going, starting with a fielder’s choice that brought home a run in the bottom of the fifth.

Down three runs in the seventh, a sacrifice fly by Bike scored Keller once again, trimming the lead to 6-4.

Later in the frame with two outs and two men on base, sophomore right fielder Brandon Shiota lined a clutch, game-tying double to right-center field.

“I hadn’t been having a very good day at the plate. I talked with Coach Miranda and he walked me through it. I was gonna sit off-speed. Guy came in first pitch fastball. Threw a slider and that’s the one I banged,” Shiota said.

The game stayed locked in a 6-6 tie until the top of the 10th inning when a lead-off double by Panthers senior catcher Joe Jimenez led to a pitching change.

With Burhans out, sophomore sidewinder Alfredo Frey was brought in to keep the game tied.

Frey recorded two outs before a two-run double by Wong stunned the home crowd. Chapman led 8-6 and never looked back.

Though the Leopards lost the first game of the doubleheader, they roared back in game two.

A balanced offense led by freshman shortstop Anthony Salcedo propelled ULV to a 9-5 win, salvaging the last game of the series, which dealt Chapman their first loss of the season.

Assistant coach Gabe Miranda discussed how his team could improve and stay competitive in the conference.

“One of the things that we need to do is grow as a team, as a unit. Continue to work to get things done and stay in the process,” Miranda said.

A week before their series against Chapman, the Leopards played four games in Austin, Texas, dropping the first three.

Though game one was well-within reach for the Leopards, games two and three quickly got out of hand, losing 2-1, 13-5, then 8-5. The team was able to bounce back in the final game, however, and won convincingly 10-3.

La Verne will host the Pomona-Pitzer Sagehens on Friday at 2:30 p.m.

Adam Van Lul can be reached at adam.vanlul@laverne.edu.