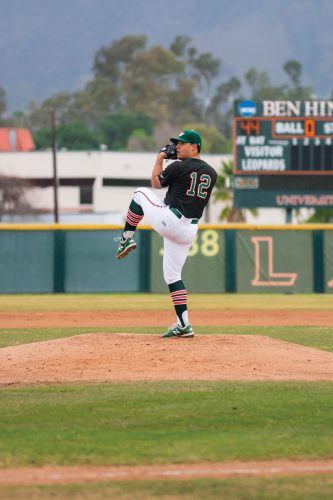 Despite jumping out to an early five-run lead, the Leopards dropped last Sunday’s game against the Centenary Gents, 10-7.

Though Sunday’s game was initially scheduled for an 11 a.m. start time, a nearly hour-long rain delay kept everyone off the diamond.

The cold weather, however, failed to dampen La Verne’s hot start in the first inning.

With two outs and two men on in the first, a ground ball hit by senior designated hitter Aaron Fong scooted under the glove of the shortstop, plating senior catcher Adam Santa Cruz for the game’s first run.

The rain returned later that inning and a second delay held the game up for 40 more minutes.

When the tarp came off the field, La Verne hitters kept up their momentum.

Shiota finished the game 3-for-4 with two RBIs.

“You have to win the individual battles to keep the team in the game. I just basically tried to focus on my part, not try to do too much. If I’m having success, maybe someone else could have success,” he said.

One batter later, sophomore third baseman Jacob Freedman brought home Shiota with a single up the middle and the Leopards led 4-0 after one complete.

Junior starting pitcher Ben Aguilera, who had breezed through the first three innings, ran into trouble in the fourth.

After back-to-back fly outs, a walk, an error and a hit by pitch loaded the bases. Aguilera was lifted for sophomore reliever Gerald Terry.

After the game, Aguilera discussed his performance.

“My inside fastball was working. I was able to jam them. What I gotta work on most are my breaking balls and my curveballs and just being able to locate better.”

Terry struggled to record the last out and Centenary tied the game with a run-scoring balk and three RBI hits, including back-to-back doubles.

Centenary responded quickly in the top of the fifth with a pair of RBI singles off Terry to take a 7-6 lead.

Though they went quietly in the sixth, La Verne’s start to the seventh inning was promising.

Singles by sophomore first baseman Tanner Siffert and Shiota put runners at the corners with one out.

After the next batter popped out on the infield, the two initiated a double steal.

Though Siffert had a late jump, a Centenary infielder blocked his basepath and he scored after the umpire called obstruction.

“So the runner on first, Shiota, had a break early. When he broke, he was trying to cause some chaos in the infield. I missed my initial read, but I tried to stay in it and not give myself up,” Siffert said.

The game did not stay tied for long, however.

Gents sophomore left fielder Gary Hewitt dealt La Verne the killing blow in the top of the eighth with a bases-clearing triple just inside the third base line.

The Leopards went quietly in the bottom half of the inning and Centenary wrapped up its stint in Southern California with a victory.

Prior to facing Centenary, La Verne played a three-game set against the Pomona-Pitzer Sagehens.

The Leopards hosted game one and though they tallied 12 hits, they fell short 9-5.

Games two and three were played as a doubleheader, this time at the Sagehens’ field in Claremont.

La Verne notched a win in game two, 5-4, with a go-ahead RBI single by Killian.

The Leopards’ offense was stifled in game three, however, as the Sagehens won handily 8-2.

The Leopards are back in action on Friday, away against Whitman.

Adam Van Lul can be reached at adam.vanlul@laverne.edu.